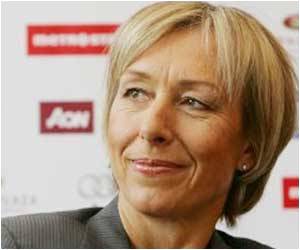 After seven months of treatment and being given the all clear, tennis legend Martina Navratilova has said breast cancer was the first opponent she feared might beat her.

At the start of the year, the nine-times Wimbledon champ said she was devastated on being diagnosed with breast cancer. But now, after seven months' treatment, she said she's beaten it," The Mirror reports.

"The worst part was the first day. I was alone. I had no one to lean on. But the response was great and I know I've saved some lives," The Mirror quoted Navratilova as saying.


She said that when she learnt she had the malignant tumour in her left breast, it was by far the worst experience of her life.

"It knocked me on my ass, really. I feel so in control of my life and my body, and then this comes," she added.

Cancer is one of the frequently talked about and most feared disease that falls under the genre of lifestyle diseases that have evolved, rather rapidly, in the past two decades.
Advertisement
But Navratilova, who was the runner-up in ITV's I'm A Celebrity in 2008, vowed to fight her cancer, which was still in a very early stage with the same determination she had mustered to be the world No1 in tennis In January 2010, a routine mammogram reveals a lump in Martina's left breast, and she was asked to come back for a closer look.

Navratilova goes back to have the lump magnified on February 23.

"They said, 'Well, there's a cluster, we'll do a biopsy just to be sure'. So I went to Denver to get the biopsy. And they said it looks pretty good, it should be nothing," said Navratilova.

The tennis legend gets a phone call from Dr Mindy Nagle at home in Aspen, Colorado on February 24, who said her that the report was positive.

"I'm like, 'Positive is good'. I was in denial for a couple of seconds and then I cried for, I don't know, a minute. OK, what do we do?" said Navratilova.

On March 15, half-hour lumpectomy test was conducted on her, in which it was revealed that the cancer was not spread.

Martina, however, planned to keep it quiet.

"Nobody needs to know. But I went four years between mammograms. Another year and I could have been in trouble. I realised how many women put it off. I thought I'd use this to remind women to go for that checkup," she said.

A determined Martina, however, plans to compete in the French Open with Jana Novotná and begins her six-week course of radiation on May 12.

Two weeks later, she does not feel any ill effects.

"They say you get tired maybe week four, five, six. I'm feeling nothing," Martina said She played the first match of the French Open on June 2, and wins the French Open Legends on June 5.

The tennis star feels more tired climbing the stairs on June 9, and finally two-days later, she had on energy left even for her usual practice.

"My worst day by far. I went to hit the ball, and I was so tired I lost it. I had to stop, I had no energy and it usually gets worse," she said. The final day of treatment arrives on June 14, and three days after treatment, Martina decides to be very careful in the near future.

"I'll be very meticulous now about going to the doctor and getting those six month check ups and one-year check ups. I'm not going to let that lapse again," she said.

Finally, with both physical and emotional energy back to normal, she along with Jana wins the Ladies Invitation Doubles at Wimbledon on July 4.