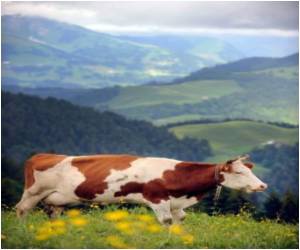 World Animal Protection (WAP) organization found that a cow's nasal temperature can easily tell about its mood and its feelings. They examined 13 cows by stroking the animals to put them in a calm and relaxed state before they measured their temperature and analysed them, the Daily Express reported.

The researchers told that emotions like stress, fear and frustration can easily be judged for a cow through its nose temperature, but only till the breakthrough point.

Gemma Carder, a researcher informed that in case if the nasal temperature of a cow drops then its ear posture will then determine their mood, such as hanging ears shows that they are relaxed, whereas upright ears are the sign of high stress.


Helen Proctor, a lead researcher of WAP expressed that understanding how animals express their positive emotions was an important area of focus for animal welfare science, but unfortunately it has widely been neglected.

How Does The Body React To Stress

Physical symptoms of stress on the body are varied, ranging from hormonal changes to changes in the nervous system, manifesting as the flight-fight-freeze response.
Advertisement
The WAP authorities said that they did the research so that they could monitor how the cows are being treated in the farms, and now they hope that it could help them raise awareness of the benefits for pasture-based farming rather than intense dairy farms.

The study is published in the Physiology and Behaviour journal.

A new study suggests that including plenty of fish in the diet during pregnancy lowers the level of anxiety.
Advertisement
Advertisement

Nasal fracture is a break in the bones and/or the cartilages of the nose. They may be accompanied by ...

Hemorrhage from the nose is known as epistaxis or nose bleeds. Epitaxis (Nose bleeds) may be a symptom of ...
This site uses cookies to deliver our services.By using our site, you acknowledge that you have read and understand our Cookie Policy, Privacy Policy, and our Terms of Use  Ok, Got it. Close
×