Telomerase, the Modern Fountain of Youth may Not be the Key to cure Aging 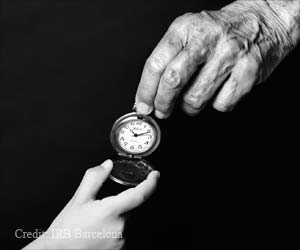 Genetic markers in the gene responsible for keeping telomeres youthfully longer, did not translate into a younger biologic age as measured by changes in proteins coating the DNA, shows new study from several institutions, including, UCLA, Boston University, Stanford University and the Institute for Aging Research at Hebrew SeniorLife. The study is published in the journal Nature Communications.

DNA methylation age is a biomarker of chronological age and predicts lifespan, but its underlying molecular mechanisms are unknown. In this genome-wide association study where blood samples from nearly 10,000 people were analysed, the research team found gene variants mapping to five loci associated with intrinsic epigenetic age acceleration (IEAA) and gene variants in three loci associated with extrinsic epigenetic age acceleration. Variants in the gene called Telomerase Reverse Transcriptase (TERT) on chromosome 5 that were associated with older IEAA were also associated with longer telomeres indicating a critical role for TERT in regulating the epigenetic clock, in addition to its established role of compensating for cell replication-dependent telomere shortening.

Advertisement
‘Methylation in the gene that is responsible for maintaining young telomeres does not coincide with a younger biological age.’

Co-author Douglas P. Kiel, M.D., M.P.H, Director, Musculoskeletal Research Center and Senior Scientist at Hebrew SeniorLife's Institute for Aging Research said, "We calculated the epigenetic aging rate for each person using a previously described epigenetic clock method. Next, we related the epigenetic aging rate to millions of genetic locations (SNPs) across all of the chromosomes. Then we studied the SNPs that had very significant associations with epigenetic aging rates. To our surprise, one of these locations was the TERT locus. The finding is surprising because this was not a study of telomere length. TERT is a subunit of the enzyme telomerase, which is a widely known enzyme because it has been touted as an anti-aging enzyme. It has been called a modern fountain of youth. However, some scientists have pointed out that it is unlikely to become a source of anti-aging therapies. Our study highlights the error in the notion that activation of telomerase (as advocated by some) will cure aging. Instead, our study shows that an anti-aging therapy based on telomerase expression would be accompanied by continued aging."

3D Imaging Could Be The New Tool To Target Obesity Treatment
The modified technology visualizes the internal architecture of fat tissues and helps devise ......

New Scale That Assesses How Employees Manage Stress at Work
The new work stress scale that provides insights into how employees manage stress may help ......