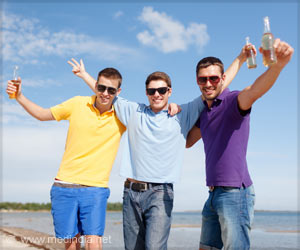 Adolescents' fun seeking can easily predict both risk taking and prosocial behavior ( an action intended to help others), reports a new study. The findings of the study are published in Child Development journal.

Research shows that risk-taking behaviors, such as binge drinking, may increase throughout adolescence. At the same time, so can prosocial behaviors (behaviors that involve doing good to benefit others). A new longitudinal study from the Netherlands sought to determine if these behaviors are related and whether certain brain regions can predict them. The study found that the two behaviors may be related and that both behaviors may be motivated by teenagers' efforts to have fun.

Chronic Lack of Sleep May Lead to Increased Risk-Taking Behavior

If a young adult sleeps less than 8 hours a night increased attention deficits occur, which can lead to considerable negative consequences.
Advertisement
‘Adolescents' fun seeking predicts both risk-taking such as binge drinking, and prosocial behavior (a voluntary behavior intended to benefit others).’


"We sought to test the pathways that support adolescents' development of rebellious and helpful behaviors," explains Neeltje E. Blankenstein, a postdoctoral researcher at Leiden University, who was first author of the study. "Because adolescence is often associated with negative stereotypes, our findings provide a more nuanced view on adolescent development by focusing on the relation between risk taking and prosocial behavior."

Teenagers who sleep less are more likely be involved in dangerous anti-social behaviors such as smoking cigarettes, consuming alcohol and drugs, driving dangerously on the roads and acts of violence.
Advertisement
Researchers examined 210 youth who were part of the Braintime study, longitudinal research conducted in the Netherlands in 2011, 2013, and 2015. The participants were ages 8 to 25 years at the start of the study, ages 10 to 27 when they were surveyed the second time, and ages 12 to 29 when they were surveyed the last time. Participants completed questionnaires each time they were surveyed, reporting on how often they engaged in rebellious and prosocial behaviors. They also reported on their tendency to seek out fun or rewarding activities, and their social skills--specifically, empathy and social perspective taking, which the authors define as the ability to understand others' viewpoints (e.g., understanding both sides when two peers disagree).

Each time they were surveyed, the participants had a magnetic resonance imaging scan to measure the maturation of two brain regions--the nucleus accumbens and the medial prefrontal cortex--to determine whether these areas, which are important for risk taking and prosocial behavior, predicted the behaviors. The final time they were surveyed, participants reported on their rebellious or risk-taking behaviors, such as getting drunk and smoking, and on their prosocial behaviors, such as helping and comforting others.

The research team found that:

The study also found that:

Among the study's limitations, the authors acknowledge, are that their questionnaires measured only behaviors of interest to the study and did not look at risk taking and prosocial behavior in the lab or in real life. They recommend that follow-up studies test a wider range of rebellious and helpful behaviors and include experiments in the lab. In addition, because the questionnaires relied on self-reports, the authors say they may be biased by social desirability, that is, by participants answering in ways they thought would make them look better.

"Our study suggests that fun seeking may be a trait that leads to diverse aspects of adolescent development, and that adolescence is a time of both vulnerabilities--seen in risk taking--and opportunities--seen in helping behaviors," according to Eva H. Telzer, associate professor of psychology and neuroscience at the University of North Carolina, Chapel Hill, who co-led the study. "It also suggests that risk taking may serve positive goals, for instance, when adolescents take risks to help others."

Study reports a marked reduction in risky sex and substance abuse in troubled 18 to 24 year-olds after several months of participating in mindful yoga and positive coping strategies.
Advertisement
<< New Chocolate Flavor is Developed During the Processing of t...
Obesity Linked to Weakened Response to Taste >>

More Disruptive The Kid In Childhood, Lesser He Will Earn In Future

Having a disruptive behavior in childhood could destroy your chances of earning a higher income in the future, finds a new study. In this study, boys inattention in kindergarten is being associated with lower earnings 30 years later.

Drinking This Popular Beverage May Drop Dementia Risk
View all
News Archive
News Resource
Advertisement
News Category
Pharmacists at Higher Suicide Risk Can You Attract Positivity Through Stress? Substance Abuse and It's Barrier: Existing Inequalities What Needs to be Improved to Prevent Suicidal Ideation? Mental Health and Homelessness  is There a Link?
More News
Sign up for Wellness Consult a Doctor Sign up for Selfcare