Tai Chi may Improve Breathing for People With Respiratory Disease 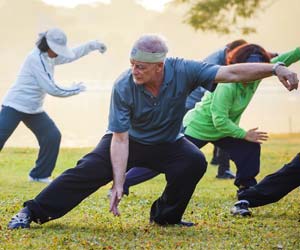 Tai Chi may be a low-cost, easily accessible treatment option for chronic obstructive pulmonary disease (COPD), according to recent research.

Currently, pulmonary rehabilitation (PR) is used where available to improve exercise capacity and quality of life, but the treatment requires access to trained staff and specialized facilities.

Tai Chi, an ancient martial art that involves significant levels of physical exertion, is gaining popularity, especially among older people, across the globe. Originating in China, Tai Chi incorporates stretching, breathing, and coordinated movement and requires no special equipment. "Knowing the potential benefits of Tai Chi, we hypothesized that, in patients being treated with medication to manage their chronic obstructive pulmonary disease (COPD) symptoms, it could help improve the quality of life when compared to a course of classical western style PR," noted Professor Nan-Shan Zhong, MD, State Key Laboratory of Respiratory Disease, Guangzhou, China.


The study tracked 120 patients with COPD in rural China who had never used a bronchodilator. After beginning daily treatment with indacaterol, subjects were randomly assigned to groups receiving traditional PR or Tai Chi. Both the Tai Chi and PR groups showed similar improvements in Saint Georges Respiratory Questionnaire (SGRQ) scores, a standard measure of health status in patients with diseases causing airway obstruction. However, after twelve weeks, a clinically significant difference in SGRQ scores emerged favoring Tai Chi. Similar trends were noted in performance of a six-minute walk test.
Advertisement
"Tai Chi is an appropriate substitute for PR," explained lead investigator Professor Yuan-Ming Luo, PhD, also of the State Key Laboratory of Respiratory Disease. "While neither training approach differed from the other by more than the minimal clinically important difference of four SGRQ points at the end of this 12-week study, an additional 12 weeks after discontinuation of formal training, improvements emerged in favor of Tai Chi in SGRQ score, six-minute walk distance, modified Medical Research Council dyspnea score, and quadriceps strength. We conclude that Tai Chi is equivalent to PR and may confer more sustained benefit."

Subjects in the Tai Chi group met for formal instruction five hours per week for 12 weeks and were taught the 24 form Yang style. The results of the Tai Chi group were compared to that of another group of subjects who received PR three times a week for 12 weeks. After the initial 12 weeks, participants were encouraged to continue their Tai Chi either alone or with a group in their community; however, no formal assistance was provided to patients during this period. Those in the PR group received verbal encouragement to remain as physically active as possible. Final analysis of all data was conducted 12 weeks after the formal training had concluded.

For many patients, reducing the symptoms of COPD can greatly improve their quality of life. While medication continues to play an important role in treating COPD, the cost of those medicines can be a barrier for some patients, especially for treating a chronic illness like COPD.

"This study demonstrates that a low-cost exercise intervention is equivalent to formal pulmonary rehabilitation, and this may enable a greater number of patients to be treated," concluded lead author of the study Michael I. Polkey, PhD, NIHR Respiratory Biomedical Research Unit, The Royal Brompton & Harefield NHS Foundation Trust and Imperial College, London, United Kingdom. "Physical activity is key to reducing symptoms in COPD. We do recommend PR, but our study shows that Tai Chi is a viable alternative when there is no local PR service. We encourage pulmonary rehabilitation providers to consider offering Tai Chi as an alternative therapy that patients would then be able to continue unsupervised in their own home."

Drug-induced Pulmonary Diseases
Some drugs or therapeutic agents cause undesirable reactions in lungs, known as drug-induced ......

Pleurisy
Are you wondering what is Pleurisy? It is a condition characterized by inflammation of the pleura. I...