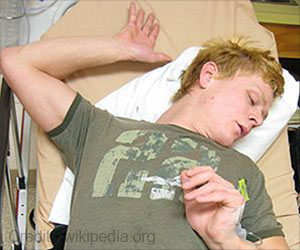 Dystonia, the third most common movement disorder after Parkinson's disease and essential tremor, affects more than 500,000 people across Europe. In dystonia patients the balance between excitatory and inhibitory neural connections responsible for 'normal' movement is disrupted. This results in patients experiencing involuntary movements, muscle spasms and contractions; in the case of cervical dystonia, symptoms affect the muscles of the neck.

Advertisement
‘Theta band oscillations may be responsible for dystonic symptoms and may also explain the mechanism of action of deep brain simulation.’

For the first time, researchers from the Movement Disorders Unit of the Department of Neurology have shown that both symptom severity and the clinical outcomes achieved through deep brain stimulation (DBS) are directly linked to a specific pattern of brain activity, which is found in patients with isolated dystonia. In these patients, oscillatory brain activity in enhanced in the 'theta band' - rhythmic neural activity which occurs at a frequency of between 4 and 12 Hertz. A total of 27 patients received bilateral DBS electrode implants as part of this study. Using stereotactic brain mapping technology, these were implanted into the globus pallidus internus (GPi), a region within the basal ganglia. While the clinical effectiveness of this treatment is well documented, and GPi stimulation is known to be capable of reducing increased neuronal activity, the underlying mechanisms had previously remained unresolved. All of the patients studied exhibited the typical interplay between brain activity, previously determined symptom severity, proximity to the optimal stimulation target, and clinical outcomes.


Prof. Dr. Andrea Kühn, of Charité's Department of Neurology, leads a team of researchers committed to the study of movement disorders and the use of DBS-based treatments. So far, her team has recorded the brain activity of more than 400 patients undergoing DBS treatment, analyzing all of the data collected for potential patterns which correlate with symptom severity and treatment outcomes. Using 'LEAD-DBS', a type of software initially developed at Charité, the researchers used these data to reconstruct a 3D-map of the oscillatory amplitudes within a virtual brain. This revealed a significant localized increase in the relevant activity pattern, which was found in the area of the brain associated with the best treatment outcomes in dystonia patients undergoing DBS.
Advertisement
"Our findings suggest that theta band oscillations may be responsible for dystonic symptoms, and may also explain the mechanism of action of DBS, as well as the location of the optimal stimulation target in affected patients," explains Dr. Wolf-Julian Neumann of the Movement Disorders Unit.

"We are also currently studying the long-term effects of DBS on neuronal activity. We are one of a few centers in the world to do so, and are currently running a separate study involving 15 patients with dystonia. Our research is made possible thanks to an innovative DBS system, which continues to record brain activity after implantation," explains Prof. Dr. Andrea Kühn, Head of the Movement Disorders Unit and Member of the Board of Directors of the NeuroCure Cluster of Excellence.

Source: Eurekalert
Advertisement
<< Antibodies can Now be Engineered to Treat Autoimmune Disease...
Hepatitis C-Infected Livers may be Safe for Transplantation >>

Deep Brain Stimulation Can Help Depressed Patients
Deep brain stimulation, a surgical procedure can aid depressed patients who are resistant to other ....

Discovery on Neuro Disease Could Aid People With Dystonia, Parkinson's and More
Twist and hold your neck to the left, now down and over to the right, until it hurts. Now imagine .....