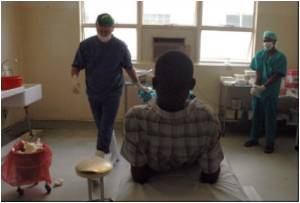 Swaziland launched Monday a drive to encourage men to volunteer for circumcision in a bid to curb the spread of HIV, of which the small kingdom has the highest infection rate in the world.

Circumcision is not traditionally practised in Swaziland, a landlocked country ruled by the polygamous King Mswati III, but studies have shown that it could halve men's chances of contracting HIV.

The drive aims to circumcise 80 percent of Swazi men within a year, said the United States Agency for International Development (USAID), which is funding the project.


The project, which kicked off Monday with the launch of four new circumcision clinics, targets men between the ages of 15 and 49, and is expected to cover the entire country by April.

"If we prevent new infections right now through this intervention, then in the near future we will start to see the HIV situation change," said programme coordinator Ayanda Nqeketo.

"Of course there is no quick-fix solution but we are talking about the impact over time," Nqeketo said.

Swaziland has the highest HIV infection rate in the world, according to the Joint United Nations Programme on HIV/AIDS. In 2009, 25.9 percent of the country's 1.2 million people were living with HIV.

According to the World Health Organisation, between 2000 and 2009 life expectancy in Swaziland plummeted from 61 years to 32 years due to AIDS related deaths.

"If you are able to do this (circumcise men) in a short period of time, the impact is felt more dramatically," said USAID country director Jennifer Albertini, adding that by acting quickly 88,000 new infections could be prevented.

The circumcision programme is projected to cost $15 million (10.9 million euros).

Do you know that there are symptoms for each stage of HIV/AIDS? Learn more from our HIV Symptom Quiz but here's a disclaimer - never go by symptoms alone. Symptoms only indicate the progression of the disease, while only a medical test can confirm it.
<< Whats in a Name? Especially, The Washington Surname
Blood and Spit Test to Detect Burnout >>