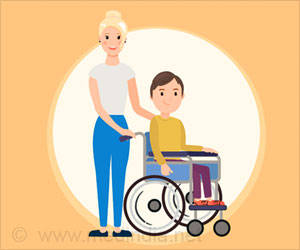 Surgical procedure known as selective dorsal rhizotomy could transform the lives of young children with cerebral palsy by improving their ability to walk, reports a new study. The findings of the study are published in The Lancet Child and Adolescent Health.

Children with cerebral palsy will now be able to have a surgical procedure that can improve their ability to walk, after analysis by the NIHR Guy's and St Thomas' Biomedical Research Centre (BRC) and King's College London showed it to be effective.
Advertisement
‘Surgical procedure known as selective dorsal rhizotomy can improve walking ability in children with cerebral palsy (CP).’
Read More..

The procedure, known as selective dorsal rhizotomy, involves cutting some of the sensory nerves from the legs as they enter the spinal cord in order to relieve stiffness, improve mobility and reduce children's pain levels. The operation is irreversible, and it had not previously been fully established whether it helped to improve children's quality of life, or what the longer-term effects were.


Because of the lack of evidence of the benefits of the procedure, NHS England established an innovative study that assessed eligible children with cerebral palsy before and after the operation. Researchers at King's College London were commissioned by the National Institute for Health and Care Excellence (NICE) to find out whether selective dorsal rhizotomy did improve outcomes for these children with cerebral palsy.
Advertisement
Cerebral palsy is the name for a group of lifelong conditions that affect movement and co-ordination, caused by abnormal development or damage to the brain that occurs before, during or soon after birth. In the UK around 1,700 children, every year are born with cerebral palsy. Treatments include medicines to relieve muscle stiffness, pain relief, and physiotherapy to aid walking.

Professor Janet Peacock, data analytics co-lead at the NIHR Guy's and St Thomas' BRC and Professor of Medical Statistics at King's College London, said: "We were commissioned to fill an evidence gap around selective dorsal rhizotomy for treating cerebral palsy - previous trials didn't look at children's quality of life, and there was not enough evidence about how children fared in the longer term. Those were both important aspects to be considered. Our study provided convincing evidence that the procedure helped the children.

"NHS England have now decided that this procedure will be funded as a direct result of this innovative project. It's great to get this decision so that it will make a difference to patients."

Five centres were selected to perform selective dorsal rhizotomy, resulting in 137 children receiving the procedure. The team at the NIHR Guy's and St Thomas' BRC and King's Technology Evaluation Centre (KiTEC) then collected and analyzed data on patients' progress for two years after their operations. Their results showed the procedure benefitted children by improving their movement, quality of life and levels of pain. They also found that there were no significant health risks to the children from the procedure.

This evidence was strong enough that NHS England has decided to fund the procedure for eligible children aged 3-9 years.

Dr. Chris Verity, a consultant pediatric neurologist at Addenbrookes Hospital, chaired the steering committee set up by NHS England to plan and oversee the study. He said: "This procedure is for children with cerebral palsy who can walk, but are having problems because the stiffness in their legs leads to pain and a lack of control over movement. Because it involves cutting nerves, the procedure is irreversible. It was key to gather robust evidence of improvement after the operation when deciding whether or not it should be routinely available for suitable children in England and Wales.

"This study shows objectively that the procedure does improve motor function, and doesn't have dangerous side effects. For some children with cerebral palsy and their families, this could really improve quality of life and help children walk more easily and without the use of walking frames and other aids."

Health Secretary Matt Hancock said: "This is a revolutionary treatment which has the power to transform the lives of young children with cerebral palsy and give fresh hope to their families.

"Every parent dreams of seeing their children live long, healthy and happy lives and I'm absolutely delighted the NHS is funding this new procedure as part of our Long Term Plan."

Meindert Boysen, director of the Centre for Health Technology Evaluation at NICE, said: "NICE welcomes the results of this study, which was commissioned and funded by NHS England and managed by NICE as part of the Commissioning through Evaluation programme. The study supports the recommendation for selective dorsal rhizotomy as an option to improve walking ability in some children we made in our 2012 clinical guideline on the management of spasticity. This addition to the evidence base means that some children with cerebral palsy will now be able to access this treatment within the NHS in England."

John Stewart, director of specialized commissioning at NHS England, said: "Thanks to this study the NHS has been funding this innovative treatment for children. As well as being fantastic news for patients and their families it is also an example of the kind of innovations that the NHS will continue to deliver as part of the Long Term Plan."

More News on:
Height and Weight-Kids Body Types and Befitting Workouts Walking for Fitness and Weight Loss Walking As An Exercise Who Else Wants to Know How Walking Helps Heart and Brain?