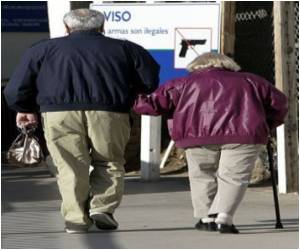 A study in September 10 issue of the journal Science says that the burden of aging populations in industrialized societies is less than expected because the health of the elderly has improved.

As wealthy countries face an unprecedented rise in the number of people over 65, researchers have developed a new aging indicator taking into account different degrees of disability and longevity.


Current determinations are based largely on United Nations aging forecasts based on the proportion of the population age 65 and older, and the "old age dependency ratio" (OADR), which considers the number of people dependent on others when they reach age 65.

Sleep is a barometer of good health in the elderly. Sleep problems in the elderly are controlled by various external and internal factors.
Advertisement
"Those measures are based on fixed chronological ages, and this can generate misleading results," said researcher Warren Sanderson, from Austria's International Institute for Applied Systems Analysis (IIASA) and Stony Brook University (SBU) in the United States.

"When using indicators that assume fixed chronological ages, it's assumed that there will be no progress in factors such as remaining life expectancies and in disability rates. But many age-specific characteristics have not remained fixed and are not expected to remain constant in the future," Sanderson said.

An increasing number of people 65 and older do not need care and sometimes are caregivers themselves, the researchers said.

When aging is measured based on a ratio of those who need care to those who can deliver care, the speed of aging is reduced by four-fifths compared to the conventional old-age dependency ratio, the researchers said.

"If we apply new measures of aging that take into account increasing life-spans and declining disability rates, then many populations are aging slower compared to what is predicted using conventional measures based purely on chronological age," said co-author Sergei Scherbov, from the IIASA and also Austria's Vienna Institute of Demography (VID).

The researchers analyzed other measures, including one looking at the ratio of disabilities in adults over the age of 20 in a population.

In Britain, for example, while the old age dependency ratio is increasing, the disability ratio is remaining constant.

"Although the British population is getting older, it is also likely to be getting healthier, and these two effects offset one another," the study said.

New ways of measuring aging that include both changes in longevity and accurate numbers about disability rates, "can help educate the public about the likely consequences of improvements in health and longevity," according to the authors.

Ageing process has always been an enigma. Recent research indicates that red wine could delay the process.
Advertisement
<< Incentive for New Drug Treatments on the Anvil in EU
In Hospital-at-home Setting, Opioid Use to Relieve Pain and... >>

Blood - Sugar Chart Blood Pressure Calculator Diaphragmatic Hernia Selfie Addiction Calculator Drug Side Effects Calculator Vent Forte (Theophylline) Calculate Ideal Weight for Infants Indian Medical Journals Hearing Loss Calculator The Essence of Yoga
This site uses cookies to deliver our services. By using our site, you acknowledge that you have read and understand our Cookie Policy, Privacy Policy, and our Terms of Use