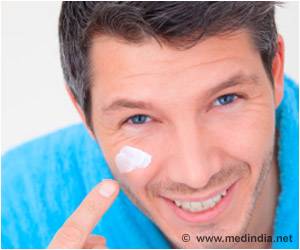 Men are judged as attractive and youthful based on their skin tone, reveals study.

The research, which was supported by Procter and Gamble, finds that evenly pigmented skin is seen as more youthful, while a smooth rosy hue from hemoglobin, the component that makes blood red, is taken as evidence of health and attractiveness.

Metrosexual Men have begun to believe that fairness is the key to social acceptance. Chemicals in Fairness creams can harm the skin.
Advertisement

Bernhard Fink and his colleagues from the University of Gottingen, collected photographs of the faces of 160 freshly shaven British Caucasian men, ages 10 to 70.


They cropped out a small square of cheek skin and showed that photograph to 152 men and 156 women. These volunteers each rated 60 digital images of cheek skin for their best guess as to age (from 1-to-99-years old), as well as attractiveness and health on a scale of 1 to 7, with 7 being the most attractive or the healthiest.

How much do you know about the human skin? Please take this quiz and find out.
Advertisement
To tease out what skin pigments mattered in people's judgments, the researchers analysed the colours of each cheek sample with a method called "chromophore mapping". This method allows scientists to determine how much melanin, a dark pigment, and haemoglobin, which gives a reddish tint, contributed to the skin colour seen.

The results revealed that people prefer evenness in men's skin, just as they do in women's. Evenly distributed melanin was associated with youth. Melanin is the pigment that darkens the skin after a tan, it's also the pigment produced in response to UV damage, causing age spots.

The researchers concluded that likewise, men whose skin had a more-even distribution of haemoglobin were judged as younger and more attractive. Both aging and health issues can affect the "blotchiness" of the skin.

"Based on the results of our study where we found that uneven redness drives down perception of health and attractiveness, one simple strategy would be investing in shaving regimes which minimize irritation," Paul Matts, a Procter and Gamble scientist who collaborated with Fink on the study, said.

The study has been published in the Journal of the European Academy of Dermatology and Venereology.

Political Views may Have a Bearing on Skin Tone Perception

A new study from the University of Chicago Booth School of Business has revealed that people's political affinity can have a bearing on how light or dark they perceive a political candidate to be.
Advertisement
<< Novel Programming Mechanism for Tumor Cells Discovered
Funding Crunch Slows Down AIDS Fight >>