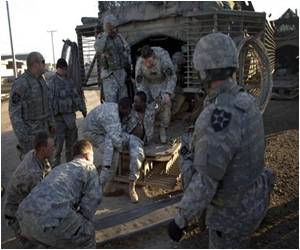 From 2003 to 2011, during the U.S.-led invasion and occupation of Iraq, for every three people killed by violence, two died as a result of the collapse of the infrustructure that supports health care, clean water, nutrition and transportation.

This is according to new estimates in a study from the University of Washington Department of Global Health published Oct. 15 in the open access journal PLOS Medicine. All told, the researchers estimate nearly a half million people died from causes that could be attributed to the war. Researchers from Johns Hopkins University, Simon Fraser University, Mustansiriya University, and the UW's Institute for Health Metrics and Evaluation also participated in the study.

The study is the first population-based survey since 2006 to estimate war-related deaths in Iraq and the first to cover the full-time span of the conflict. Researchers state with 95% certainty that there were approximately 461,000 excess deaths during the Iraq war, but the actual number could be as low as 48,000 or as high as 751,000. (For comparison, three years after the 2010 earthquake in Haiti, the death toll has been estimated anywhere between 46,000 and 316,000).


In the PLOS Medicine study "Mortality in Iraq Associated with the 2003-2011 War and Occupation: Findings from a National Cluster Sample Survey by the University Collaborative Iraq Mortality Study"researchers detail improvements in estimating mortality during the Iraq war and emphasize the public health consequences of armed conflict. More than 60% of those deaths were directly attributable to violence while the rest were associated with indirect, but war-related, causes.

Iraq War Veteran Finishes 2,012 Mile Walk for Charity
In Canary Wharf, London, a former soldier who was injured in a rocket attack in Iraq in 2008, has .....

Iraq War Aftermath: US Army Suicides Rose 80%
American military doctors have reported that the number of suicides in the US Army rose by 80 ......

Revolution in Battlefield Medicine Ushered in by Iraq War
Dramatic advances in battlefield medicine have been made in the Iraq war....