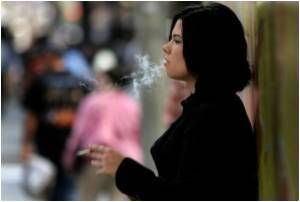 When a person smokes, the number of nicotine receptors in the brain - which bind to nicotine and reinforce the habit of smoking - are thought to increase in number.


"When you look at it by gender, you see this big difference," Fox News quoted study researcher Kelly Cosgrove, an assistant professor of psychiatry at Yale University School of Medicine, as saying.
Advertisement
The findings are important because the main treatments for people who want to quit smoking are nicotine-replacement therapies, such as nicotine patches and gums.

The study suggests women smokers may benefit more from other types of treatment that don't involve nicotine, including behavioural therapies, such as exercise or relaxation techniques, and non-nicotine containing medications, Cosgrove said.

Elements of smoking not related to nicotine, such as the smell and act of holding a cigarette, may play a greater role in fuelling the habit of women smokers, compared with men, Cosgrove said.

Cosgrove and colleagues scanned the brains of 52 men and 58 women, about half of whom were smokers. The researchers examined nicotine receptors in the brain by using a radioactive marker that binds specifically to an important group of receptors that are primarily responsible for the body's physical dependence on nicotine, Cosgrove said.

Smokers in the study had abstained from smoking for a week so that their nicotine receptors would be free to bind to the marker used for imaging.

"You can replace all the nicotine you want, and people might still want to smoke," Horovitz said.

For instance, smoking is a big stress reliever for some people. Even the act of deep breathing is a part of the habit, and breathing exercises may help smokers because they mimic puffing a cigarette, Horovitz said.

The reason for the sex difference seen in the study is not known, but it may have something to do with levels of the hormone progesterone.

Levels of this hormone fluctuate in females depending on the stage of the menstrual cycle, and are much higher after ovulation. The study found higher levels of progesterone were associated with a lower number of available nicotine receptors, the researchers said, suggesting progesterone may indirectly block these receptors.

The study has been published in the April issue of Archives of General Psychiatry.