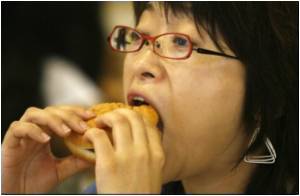 Parents who give their children food to quieten them down could be setting them up for a lifetime of weight problems, a study has suggested.

The research conducted for British weight loss group Slimming World suggested that the widely used tactic can lead to a bad diet in adulthood, low self-esteem, comfort-eating and eating disorders, while it will also teach children to use food as a "source of solace" which fills an emotional void, reports the Age.

According to the YouGov study, those who recalled receiving food as a reward during childhood were more likely to have an obese BMI than those who were not given such handouts - some 34 per cent compared with 25 per cent.


They were also significantly more likely to have a history of dieting; have tried extreme weight loss methods including starving themselves or making themselves sick; see food as a preoccupation and a temptation; feel unhappy with their weight and eat high calorie foods to help them deal with stress.
Advertisement
While occasional unhealthy treats are not linked to problems in later life, obesity researcher James Stubbs warned of the dangers associated with relying on food as a parenting aid.

He said: "It's when parents repeatedly use high calorie foods as a quick way to appease their children when they're upset or to quieten them down when they misbehave that they begin storing up future problems for them.

"In these instances, parents can unwittingly create an association in the minds of their children that leads to them using high calorie foods as a way to make themselves feel better right into adulthood, where the link becomes even more deeply ingrained.

"As adults, when we're feeling down, stressed or lonely we seek comfort where we can. For those who have learned to see high energy foods as a way to calm their mood, their easy availability can lead to comfort foods becoming a frequent source of solace."