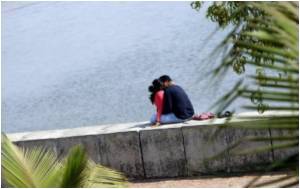 Happy teenagers make happier adults but they are more likely to get divorced, researchers have revealed.

The team studied the link between a positive adolscence and well-being in later life and said one has a direct effect upon the other, reports the Telegraph.

Those who have a happy upbringing are 60 per cent less likely to suffer mental problems and also perform better at work and socially.


But they are also more likely to end up divorced, they found.

Researchers used statistics from 2776 people who took part in the 1946 British cohort birth study, and looked at their mental wellbeing through life.

You can save your marriage - even when your partner insists on a divorce.
Advertisement
The youngsters rated positively in their teens were found to be significantly more likely to have higher levels of well-being later on, including greater work satisfaction, more frequent contact with family and friends and more social engagements.

But researchers also found they were more likely to get divorced, with one possible explanation being a higher level of self esteem so a greater ability to leave an unhappy marriage.

Felicia Huppert said: "The benefits to individuals, families and to society of good mental health, positive relationships and satisfying work are likely to be substantial.

"The findings support the view that even at this time of great financial hardship, policymakers should prioritise the well-being of our children so they have the best possible start in life."

The study has been published in the Journal of Positive Psychology.

2010 Had More Chinese Getting Divorced Than Married

Nearly two million couples divorced in 2010 in China -- far more than the number who got married in the world's most populous nation, state media reported.
Advertisement
<< First Aid can be Performed by 5-Year-Olds as Well
Study Finds Appeasing Kids With Food Could Lead to Bad Diet... >>

More News on:
How to Save your marriage Divorce: Pros and Cons Celebrating Life: Positivity and Rejoicing How to Handle Depression and Stress while Going Through a Divorce?