Spread of Early Lung Cancer may be Prevented by Bone Drug 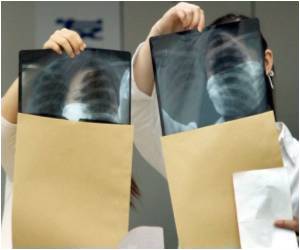 A drug, currently used to treat bone metastases in patients with lung cancer, could also be useful to prevent the cancer from spreading in the first place, an Italian research has found.

Michela Quirino and colleagues from the Catholic University of the Sacred Heart in Rome have reported important new evidence that zoledronic acid may be able to prevent lung cancer metastases from recruiting the new blood vessels they need to survive.

Congenital disease of the lung in which multiple cysts (water bubbles) develop in the lung tissues, sometimes affecting a whole lobe of the lungs.
Advertisement


Each patient was administered 4 mg of zoledronic acid, and their blood levels of several molecular markers of angiogenesis were measured before and 48 hours after the injection.
Advertisement
"We found a statistically significant reduction of VEGF levels at day 2 after 4 mg ZA intravenous infusion compared with basal values," said Quirino.

The researchers did not record any significant effect of injecting the drug on the levels of the other two mediators of angiogenesis, PDGF and HGF.

"If further studies should confirm a possible anti-metastatic effect of this drug, possibly relying also on its anti-angiogenic effect, it could be introduced in the early management of the disease, even as an adjuvant therapy," she said.

The procedure by which tissue samples are obtained from the lung is known as lung biopsy. The biopsy tissues ...