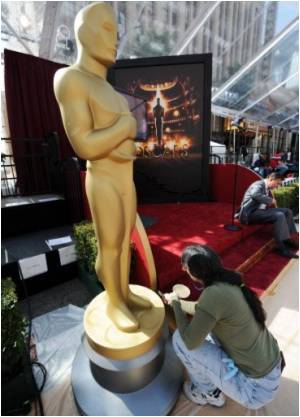 Keiko Brown will be rooting for "The King's Speech" to take home best film, best actor, best everything, when the envelopes are opened Sunday at the Academy Awards ceremony in Hollywood.

Brown's 17-year-old daughter Melanie stutters, as did King George VI, who is played in the movie by British actor Colin Firth.

Stuttering, stammering or disfluency is a speech disorder that can hamper communication and affect a person's quality of life. Its impact can be treated effectively by stuttering therapy.
Advertisement

To the mother of a child who stutters, "The King's Speech," which has been nominated for multiple Oscars including best film and best actor for Firth, has gone a long way toward teaching people with fluid speech about the high-stress world of stutterers.

"Before, nobody really understands," said the Japan native as she sat in the waiting room of therapist Vivian Sisskin, the University of Maryland speech disorder expert who had just led Melanie and three other teenage girls with stutters through a one-hour therapy session.

Presbycusis (age related hearing loss) is the gradual loss of hearing that occurs as people get older. Presbycusis involves progressive sensorineural hearing loss.
Advertisement
"People say they understand, but I don't think they really do understand how much they suffer and how much stress they have every single day," Brown said, her gaze fixed on Melanie, sitting at her side.

"The King's Speech" is based on the true story of how a speech therapist helped George VI control a severe, lifelong stutter to allow the monarch to address the British people as they prepared to enter World War II.

The National Stuttering Association hailed it as an "accurate depiction of people who stutter through the compelling story of a real-life hero."

Debbie Grinstead, mother of 16-year-old Claire, called "The King's Speech" a "burden-lifting experience for those who stutter," while her daughter, whose speech disorder includes tongue clicks, said Firth deserved an Oscar just for having the courage to step into the skin of a stutterer.

"Stuttering is so stressful. If you induce that kind of stress on yourself, I think that deserves everything," she said.

Stutterers are often thought to be stupid and nervous, but the four girls in therapy with Sisskin are anything but.

Jacqueline Speiser, 16, is an "A" student at the best public high school in the United States, Thomas Jefferson High School for Science and Technology, in Virginia.

She started therapy with Sisskin around four months ago after she realized "I was messing up my advanced Spanish course, because I would stutter during presentations."

Melanie wants to be a doctor when she grows up. Claire wants to be a genetics counselor, and Dina Trembinsky, 16, has her eye on a job in communications and advertising.

Some fluid speakers assume -- wrongly -- that stutters are caused by abusive parents or are a psychological disorder.

But a study published last year in the New England Journal of Medicine found that they could could be linked to defects in three genes.

"When you meet someone who stutters, it's just like meeting someone with another condition that they were born with or have a predisposition to develop, like asthma or diabetes," Sisskind said.

Jane Fraser, president of the Stuttering Foundation of America, said "The King's Speech" has created a "tsunami of awareness" of the fear and stress that stuttering brings to sufferers and their families.

"Even close family members never understood the horror that it was for him -- and for me, waiting for him to get his words out. As a child, I would sit there and get so tense waiting for those words to come out, and agonize over what I could do to help get them out."

Stuttering tends to come on between the ages of two and five, but in nearly 80 percent of cases, the child spontaneously heals from his or her stutter.

Sitting on the off-white couch in Sisskind's waiting room, Irina Tremblinsky wondered if she could have prevented daughter Dina's stammer "by dealing with it right away when we noticed that she stuttered, when she was two years old."

"But the pediatrician told us don't worry about it, she's too small. So we waited, and we probably waited too long," she said.

Keiko Brown wished for a miracle that would allow her to trade places with Melanie.

"If they can switch us and I can stutter from now on, it doesn't bother me," she said. "But her life is from now on. And she has to go through so much."

Alzheimer''s disease is a progressive neurodegenerative disease affecting memory and thinking and making the person increasingly dependent on others.
Advertisement
<< Spread of Early Lung Cancer may be Prevented by Bone Drug
Botox Useful in Treating Vaginismus >>