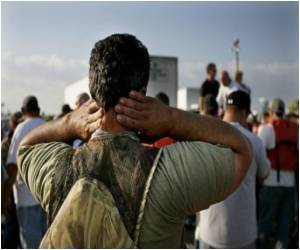 The UN children's agency painted a grim picture of prospects for the world's young in its annual report that also touches on rising youth unemployment, one million children kept in jail and youths press-ganged into armies.

Adolescents "seldom come first" when governments set social targets and that has to change, UNICEF said in its "State Of The World's Children" report released Friday.

About 13 percent of the global workforce aged under 19 is jobless and youth unemployment is now a concern in nearly every country, the report said.


"Adolescents struggle to find decent work guaranteeing them a foothold above the poverty line.

"In many developing countries, the paucity of opportunities for productive full-time employment means that the first experience of work for young people is too often one of wasted talent, disillusionment, underemployment and continued poverty."

Depression is one of the most common mental disorders affecting approximately 340 million people in the world. No one is immune from depression - it occurs in people of all social classes, all countries and all cultural settings.
Advertisement
Too many youths are also in conflict with the law. UNICEF estimated that at any one time, one million children are detained by law enforcement agencies around the world.

"While incarceration is unavoidable in some circumstances, it is essential to explore alternatives to custodial sentencing wherever possible," said UNICEF, calling for juvenile judicial systems to be geared more toward "reconciliation and reintegration".

Adolescents remain vulnerable to "recruitment by armed groups, forced to carry weapons and participate in atrocities or else held as sexual or other types of slaves."

UNICEF said there has to be a major increase in education investment.

"Many of those who have been to school are emerging with insufficient skills to compete in an interconnected world," said the report. "This skills deficit can hold back entire economies."

"The accumulated evidence demonstrates that investing in adolescents provides our best hope of breaking the intergenerational cycle of poverty and inequity that weakens communities and countries and imperils the development and rights of countless children."

Compulsory secondary education had to be extended to more countries which must "harness the idealism, energy and potential of the rising generation of adults" to boost their own economies.

Depression is a common disorder and many worldwide suffer from depression. Early recognition of symptoms and signs of depression can help in taking a holistic approach to the management of depression.
Advertisement
<< World's Highest Mark Goes to Hong Kong Math Whiz
Spread of Early Lung Cancer may be Prevented by Bone Drug >>

Find a Doctor Accident and Trauma Care Daily Calorie Requirements Sinopril (2mg) (Lacidipine) Noscaphene (Noscapine) Color Blindness Calculator Find a Hospital Pregnancy Confirmation Calculator Blood Donation - Recipients Sanatogen
This site uses cookies to deliver our services. By using our site, you acknowledge that you have read and understand our Cookie Policy, Privacy Policy, and our Terms of Use