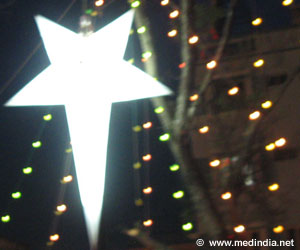 The director general of the religious affairs ministry said, "All events related to Christmas and New Year celebrations are contrary to Islamic culture, which could damage the faith of the Muslim community."

Christmas Shopping Can Buy You Intense Dose Of Happiness

Material purchases bring repeated doses of happiness over time, whereas experiential purchases offer a more intense but fleeting dose of happiness.
Advertisement
‘All events related to Christmas and New Year celebrations have been banned in Somalia, as they are contrary to Islamic culture, which could damage the faith of the Muslim community.’

Sheikh Mohamed Khayrow said, "Security forces had been ordered to break up any such celebrations. There should be no activity at all."


Sheikh Nur Barud Gurhan, of the Supreme Religious Council of Somalia, said, "Non-Muslim festivities might provoke the ire of the Shebab, East Africa's Al-Qaeda branch, which is headquartered in Somalia. We are warning against the celebration of such events which are not relevant to the principles of our religion. It could provoke the Shebab to carry out attacks."

Top 10 Tips to Manage Stress and Anxiety During Christmas

The pressure to live up to the hype of Christmas spirit is enough to make you mentally sick. Here are top tips to manage stress and anxiety during Christmas.
Advertisement
Last year Shebab militants launched a Christmas attack on Mogadishu airport that killed at least 12 people.

Somalia is at least the second Muslim majority country to ban Christmas in 2015, after Brunei announced a similar prohibition. Somalia also issued a previous ban in 2013.

Somalia also follows the Islamic calendar that does not recognize January 1 as the beginning of the year.

There are almost no Christians left living in Somalia, although a bombed-out Italian-built Catholic cathedral remains a city landmark in the capital Mogadishu.

Follow These Tips to Curb Those Extra Kilos This Christmas Season

With all those carb-heavy boozy party invitations, tempting foods, stress and overworked credit cards, the run-up to New Year's day can really be a tough time.
Advertisement
<< Journal Of Dental Research Features Dental Implant Complicat...
People With Respiratory Disorders May Benefit From Music The... >>

As Christmas is nearing, we give you some important tips to keep your pets safe and comfortable during this festive season.

Turmeric Powder - Health Benefits, Uses & Side Effects Sinopril (2mg) (Lacidipine) Accident and Trauma Care Diaphragmatic Hernia Find a Doctor Noscaphene (Noscapine) Loram (2 mg) (Lorazepam) A-Z Drug Brands in India Post-Nasal Drip Find a Hospital
This site uses cookies to deliver our services. By using our site, you acknowledge that you have read and understand our Cookie Policy, Privacy Policy, and our Terms of Use