In the latest article in ecancermedicalscience, a team of researchers led by Dr Ceri Phelps of the University of Wales Trinity Saint David, Swansea, Wales decided to test a simpler, smaller approach - accessible, cheap, and not prone to whims of weather.

The benefits of health nature-based activities are well-known; many programs encourage cancer patients to tend gardens to improve psychological health. But nature isn't always accessible, particularly for cancer patients who are frail or disadvantaged. And it can take a lifetime of gardening experience to find joy in a garden in winter.


To find out whether the benefits of nature could be captured on a small scale, Dr Phelps and colleagues prepared a feasibility study of a simple ecotherapy-based intervention in women affected by breast cancer.


‘To find out whether the benefits of nature could be captured on a small scale, researchers prepared a feasibility study of a simple ecotherapy-based intervention in women affected by breast cancer.’


Seven women from an existing breast cancer support group cultivated and customized their own indoor "garden bowls" for three months. They started with a bowl, compost and three starter plants, which they took home and tended daily. The women reported on their feelings and findings in diary entries, collected within the research paper.

"I think it doesn't matter whether you've just been diagnosed or whether it's been ten years down the road - it could be beneficial," one of the patients explained when reflecting on her bowl. "The garden bowl could help you deal with whatever you have left behind."

The women felt that the process of tending the bowl and reflecting upon it led to feelings of positivity, control and meaning. "The take-home message is that psychosocial interventions do not have to be complex, labour-intensive to deliver, or costly," says Dr Phelps. While it's a simple study on a small group, the paper suggests that even small interventions can have big impact.

"The concept was inspired through a unique meeting of minds between myself, a registered health psychologist familiar with the world of randomized trials and psychological interventions, and co-researcher Carol Hughes, a qualified counsellor and Gestalt therapist who believes that engagement with the natural world can have a powerful healing and therapeutic effect amongst individuals experiencing distress," explains Dr Phelps. "It was two different but complementary disciplines coming together to create a really unique project!"

What's next for the multidisciplinary research team? "We are also considering whether such benefits can potentially be achieved through "virtual" green activities," says Dr Phelps. "We're exploring whether there is something unique about the living, breathing nature of real green activities that cannot be captured through virtual reality worlds." And it's another nature-based benefit that could be harvested - rain or shine. 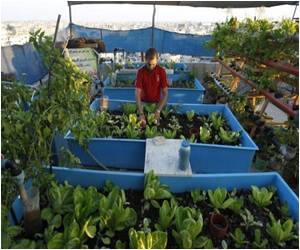 Nearly 75% of All Vegetables Consumed Now in Kerala are Grown in Kitchen Gardens
The production of vegetables in Kerala was only 22% in 2012 and the state had heavily relied on Karnataka and Tamil Nadu for supplies.
READ MORE

Make Children Grow Vegetables in Their School Garden to Encourage Healthy Eating
When school-grown salad vegetables were incorporated in the cafeteria school lunch, kids were over four times as likely to consume salad and not waste them.
READ MORE

One DOT Centre in Each Tea Garden to Bring Down TB
Tea labourers in Assam are affected with TB and failure to complete the entire course of medications ends in recurrance.
READ MORE

Playing in Gardens and Open Areas Reduces the Risk of Childhood Obesity
Young children in three to five age group with no access to green and open places are at a higher risk of developing obesity by the time they turn seven.
READ MORE