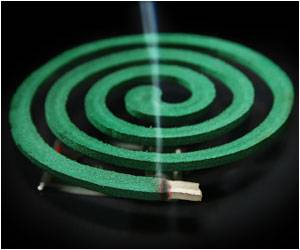 The discovery of a new class of insect repellant has created the possibility of a new agent that is not only thousands of times more effective than DEET - the active ingredient in most commercial mosquito repellants - but also works against all types of insects, including flies, moths and ants.

The new class of insect repellant is made in the laboratory of Vanderbilt Professor of Biological Sciences and Pharmacology Laurence Zwiebel.

Scientists are unravelling the mechanism by which fruit flies differentiate between smells, which they hope would lead to the development of better insect repellents.
Advertisement

"It wasn't something we set out to find. It was an anomaly that we noticed in our tests," said David Rinker, a graduate student who performed the study in collaboration with graduate student Gregory Pask and post-doctoral fellow Patrick Jones.


"It's too soon to determine whether this specific compound can act as the basis of a commercial product. But it is the first of its kind and, as such, can be used to develop other similar compounds that have characteristics appropriate for commercialization," said Zwiebel.

Insect Repellents - How They Work

Citronellal and DEET make effective insect repellents because of the way the molecular makeup of the insect is structured, reveals a new study.
Advertisement
The discovery of this new class of repellant is based on insights that scientists have gained about the basic nature of the insect's sense of smell in the last few years.

The researchers determined that the compound named VUAA1activates insect odorant receptors OR-Orco complexes in a manner similar to a typical odorant molecule.

Jones also verified that mosquitoes respond to exposure to VUAA1, a crucial step in demonstrating that VUAA1 can affect a mosquito's behavior.

"If a compound like VUAA1 can activate every mosquito OR at once, then it could overwhelm the insect's sense of smell, creating a repellant effect akin to stepping onto an elevator with someone wearing too much perfume, except this would be far worse for the mosquito," Jones said.

The researchers have just begun behavioral studies with the compound. In preliminary tests with mosquitoes, they have found that VUAA1 is thousands of times more effective than DEET.

They have also established that the compound stimulates the OR-Orco complexes of flies, moths and ants.

The study was published this week in the online Early Edition of the Proceedings of the National Academy of Sciences.

Researchers have identified two compounds emitted by mosquito predators that make the mosquitoes less inclined to lay eggs in pools of water.
Advertisement
<< Health Professionals Concerned Over Biases In Commercially ...
Tobacco, Illicit Drugs and Alcohol Use More Common in Aborg... >>

Vector-Borne Diseases
News Archive
News Resource
News Category
Death Caused by a Rare Type Amoeba: Research Study Japan Approves Smallpox Vaccine for Monkeypox Did Human Evolution Shrink Your Brain? What to Do When Your Asthma Medication Doesn't Work? Which is Better to Improve Smoker's Health  Cigarettes or E-Cigarettes?
More News
Sign up for Wellness Consult a Doctor Sign up for Selfcare