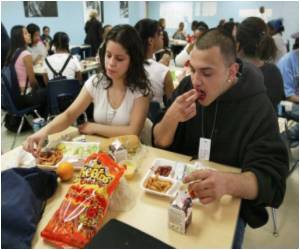 A new study in the Journal of Consumer Research says that consumers will choose and eat more indulgent food after they see someone who is overweightunless they consciously think about their health goals.

"Why do people often think back on a pleasant evening with friends and realize that they ate more and worse food than they wish they had?" ask authors Margaret C. Campbell (Leeds School of Business) and Gina S. Mohr (University of Colorado, Boulder). If any of those friends carry a few extra pounds, just being in their presence could trigger what the authors call a "negative stereotype."

The research suggests that merely seeing someone who is strongly associated with an undesirable behavior leads to surprising increases in the behavior. "Seeing someone overweight leads to a temporary decrease in a person's own felt commitment to his or her health goal," the authors explain.


In one study, researchers asked people who were walking through a lobby if they would take a quick survey. The surveys had photos of an overweight person, a person of normal weight, or a lamp. After completing the survey, the researchers asked respondents to help themselves from a bowl of candy as a thank you. "People who completed the survey that included a picture of someone who was overweight took more candies on average than people who saw either of the other two pictures," the authors write.

Childhood obesity is one of the most serious health challenges in the developing countries and needs to be understood and tackled effectively.
Advertisement
In subsequent studies, people who were invited to do a cookie taste test ate twice as many cookies or candy after seeing someone who was overweight. This was true even if the participants had a goal to maintain a healthy weight and believed that cookies and candy can lead to weight problems.

Two main strategies served to counteract people's tendency to overeat when in the presence of overweight individuals: thinking about health goals and being reminded of the link between eating and becoming overweight.

Because weight problems can spread through social networks, the authors have advice for people who are concerned about overindulging. "Thinking about personal health goals and reminding oneself of the undesirable effects of eating indulgent food at the time of possible consumption can help people avoid eating too much," the authors conclude.

Obesity is the root cause of problems like diabetes, heart disease, stroke, arthritis and gall bladder disease. A serious look at our strategies is needed to tackle this fast growing epidemic.
Advertisement
<< Secret Behind Shane Warne's Young Look
Role of Alcohol Drinking in the Risk of Cancer >>

Blood Pressure Calculator A-Z Drug Brands in India Accident and Trauma Care Blood Donation - Recipients How to Reduce School Bag Weight - Simple Tips Drug - Food Interactions Calculate Ideal Weight for Infants Find a Hospital Loram (2 mg) (Lorazepam) Indian Medical Journals
This site uses cookies to deliver our services.By using our site, you acknowledge that you have read and understand our Cookie Policy, Privacy Policy, and our Terms of Use  Ok, Got it. Close
×