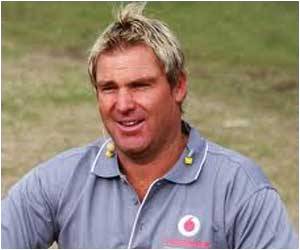 Shane Warne has denied Botox or facelift claims, attributing his youthful looks to moisturizers , healthy eating and exercise. "New Estee Lauder moisturisers for my skin have made a big difference," he said, adding: "Yes, I'm still a man."

"I am 86kg. Lost 7kg and close to being the fittest I have ever been. Fitness and being healthy is now a daily habit I feel great and never been happier in my life," he posted.


"I am also eating very healthily and am flattered that people think I look younger. I have worked hard over the last five months on fitness," he added.

Botox or Botulinum toxin A is widely employed in the cosmetic industry due to its anti-ageing properties.
Advertisement
<< Botox, Facial Fillers Help Stars Look Younger
Seeing Overweight People may Make Us Eat More >>

Loram (2 mg) (Lorazepam) Calculate Ideal Weight for Infants Sanatogen Accident and Trauma Care Vent Forte (Theophylline) Blood - Sugar Chart The Essence of Yoga Iron Intake Calculator Diaphragmatic Hernia Sinopril (2mg) (Lacidipine)
This site uses cookies to deliver our services. By using our site, you acknowledge that you have read and understand our Cookie Policy, Privacy Policy, and our Terms of Use