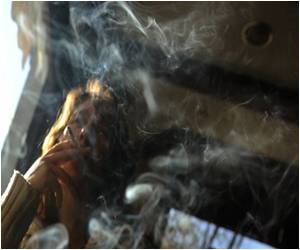 People who are exposed to secondhand smoke during childhood or as an adult are more likely to develop early signs of heart disease, finds research.

Researchers found that 26 percent of people exposed to varying levels of secondhand smoke had signs of coronary artery calcification (CAC), compared to 18.5 percent in the general population. The new data also shows that people who report higher levels of secondhand tobacco smoke exposure also have the greatest evidence of coronary artery calcification, a build-up of calcium in the artery walls as seen on a low-dose computed tomography scan. While previous studies have shown a marked increase in cardiac events related to secondhand tobacco smoke, authors say this study is the first to demonstrate a clear dose-response relationship between secondhand smoke exposure and the earliest detectable signs of heart disease.

"This research provides additional evidence that secondhand smoke is harmful and may be even more dangerous than we previously thought," said Harvey Hecht, MD, associate director of cardiac imaging and professor of medicine at Mount Sinai Medical Center and study author. "We actually found the risk of secondhand smoke exposure to be an equivalent or stronger risk factor [for CAC] than other well-established ones such as high cholesterol, hypertension and diabetes. Passive exposure to smoke seems to independently predict both the likelihood and extent of CAC."


After adjusting for other cardiovascular risk factors, people classified as having low, moderate or high secondhand smoke exposure were 50, 60 and 90 percent more likely to have evidence of coronary artery calcification than those who reported minimal exposure. The apparent health effects of secondhand smoke on CAC remained regardless of whether the exposure was during childhood or adulthood. Dr. Hecht said these results further underscore the need for enforceable public smoking bans and other measures to reduce passive inhalation of cigarette smoke.
Advertisement
"Tobacco smoke can damage the coronary arteries of nonsmokers through many different ways, which can lead to plaque formation and then to heart attacks, so this lends more [credence] to enforcing smoking bans," Dr. Hecht said. "We know heart disease is significantly accelerated by secondhand smoke exposure, so it should be included as a routine part of medical exams and discussions about heart disease and try to prevent it as best we can."

This study included 3,098 healthy people between 40 and 80 years old who had never smoked (defined as having smoked fewer than 100 cigarettes in their lifetime) and who were already enrolled in the Flight Attendant Medical Research Institute (FAMRI)-International Early Lung Cancer Action Program CT screening program from 2005-2012. Each provided detailed health information and had a single low-dose non-gated CT scan as part of the FAMRI program. A questionnaire was administered to gauge personalexposures to secondhand smoke. Researchers then assigned a total secondhand tobacco smoke exposurescore based on a how long they were exposed (years), daily intensity (packs per day) and if smokers wereallowed to smoke anywhere or if they were restricted or not permitted (permission status).

Compared to those who had minimal exposure to secondhand smoke, people with higher levels ofexposure tended to be older, were more often women and more likely to have diabetes, high cholesterol and high blood pressure.

Although his team did not use the standard Agatston score to assess CAC, Dr. Hecht said this study further validates the utility of low-dose non-gated CT scans to measure the amount of plaque in the coronary arteries in nonsmokers exposed to secondhand tobacco smoke.

"By using this [imaging/approach], people who have been exposed to tobacco smoke can be evaluated forlung cancer, emphysema and coronary artery disease in a single low-dose scan," he said. As a general rule, people should limit secondhand smoke exposure as much as possible.

Future research directions will include how to determine if decreasing exposure to secondhand tobaccosmoke can reduce new plaque formation and/or cardiac events in this group. This study was funded by the Flight Attendants Medical Research Institute.

Exposure to Secondhand Smoke Ups Dementia Risk Too
Passive smoking, which has already been linked to heart disease, has also been found to increase ......