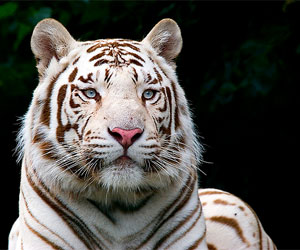 Researchers have solved the genetic mystery of Indian white tigers. Their spectacular white coats are produced by a single change in a known pigment gene, according to the study, appearing on May 23 in Current Biology, a Cell Press publication.

"The white tiger represents part of the natural genetic diversity of the tiger that is worth conserving, but is now seen only in captivity," says Shu-Jin Luo of China's Peking University.

Luo, Xiao Xu, Ruiqiang Li, and their colleagues advocate a proper captive management program to maintain a healthy Bengal tiger population including both white and orange tigers. They say it might even be worth considering the reintroduction of white tigers into their wild habitat.


The researchers mapped the genomes of a family of 16 tigers living in Chimelong Safari Park, including both white and orange individuals. They then sequenced the whole genomes of each of the three parents in the family.
Advertisement
Those genetic analyses led them to a pigment gene, called SLC45A2, which had already been associated with light coloration in modern Europeans and in other animals, including horses, chickens, and fish. The variant found in the white tiger primarily inhibits the synthesis of red and yellow pigments but has little to no effect on black, which explains why white tigers still show characteristic dark stripes.

Historical records of white tigers on the Indian subcontinent date back to the 1500s, Luo notes, but the last known free-ranging white tiger was shot in 1958. That many white tigers were hunted as mature adults suggests that they were fit to live in the wild. It's worth considering that tigers' chief prey species, such as deer, are likely colorblind.

Captive white tigers sometimes do show abnormalities, such as crossed eyes, but Luo says any frailties are likely the responsibility of humans, who have inbred the rare tigers in captivity. With the causal gene identified, the researchers ultimately hope to explore the evolutionary forces that have maintained tigers in both orange and white varieties.

Human Teeth as Strong as Those of Tiger Sharks
A new study conducted by a team of German researchers has found that human teeth are smaller in ......

Scientists Say Battle Won Against Asian Tiger Mosquito
The efficacy of a combination of strategies to reduce the population of tiger mosquitos has been ......

San Francisco Zoos Killer Tiger Paid The Price For Being Itself
Tatiana , a 4-year-old Siberian tiger fatally attacked one zoo visitor and injured two others .....