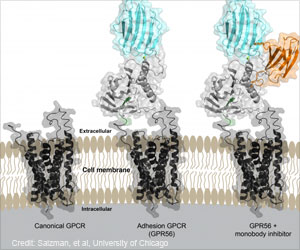 A research team from the University of Chicago have studied the three dimensional structure of a cell receptor molecule which is related to the development of various diseases like melanoma, leukemia and brain disorders like frontoparietal polymicrogyria.

The research study based on the protein molecule which provides a framework for developing new pharmaceutical treatment for diseases was published in the journal Neuron.

Researchers have found a way to maintain a high-energy state in the enzyme(necessary for catalyzing of chemical reactions) by mutating the protein.
Advertisement
‘Discovery of the three dimensional structure of protein molecules helps to target new treatment options for diseases mediated through proteins.’

Gabriel Salzman, an MD/PhD student in the Biophysical Sciences Graduate Program at the University of Chicago, says "Given the complicated biology mediated by aGPCRs, particularly in neurodevelopment, we believe our work will pave the way for future studies investigating the molecular details of these important processes, bringing us closer to the ultimate goal of combatting diseases influenced by aGPCRs."


Scientists have been discovering innumerable roles played by the G protein coupled receptors over the years. But however, the structural description for knowing the various functions of extracellular regions were found to be missing. And also these regions could also be targeted for developing future pharmaceutical drugs.

The unprecedented view of the protein doublecortin kinase like domain 1 (DCLK1) could provide clues to how it contributes to cancer formation and progression.
Advertisement
Salzman study focussed on the extracellular region of GPCR which is also known as GPR56 or ADGRG1 which was found to play a major role in the muscle cell , cancer and neurodevelopment. GPR56 plays a role in developing the cortex cells and oligodendrocytes.

The project was carried out by Salzman along with Demet Arac, PhD, and Shohei Koide, PhD to study about targeting the extracellular region of GPCR for pharmaceutical development.

The study focused on a unique protein domain called PLL, and when deleted would increase cell signaling.

The icosahedra could be used for many applications: to package a chemotherapy agent to deliver it to a specific organ, or to design more effective vaccines.
Advertisement
<< How Brain Separates Relevant Irrelevant Information?
Study Reveals New Ways That Viruses Modulate Greenhouse Gase... >>