Saudi Urged Not to Medically Paralyze Man in "Retribution" 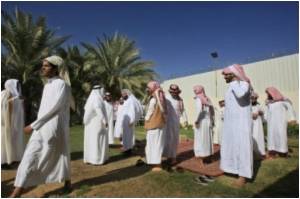 Human rights group, Amnesty International, urged Saudi Arabian authorities on Friday not to medically paralyse a man in "retribution" for similar injuries he allegedly caused during a fight two years back.

According to the New York Post, Amnesty quoted reports, which revealed that a court in the northwest of the country had approached a number of hospitals to ask if they could cut the man's spinal cord in retribution, as requested by the victim.


"We urge the Saudi Arabian authorities not to carry out such a punishment, which amounts to nothing less than torture. While those guilty of a crime should be held accountable, intentionally paralyzing a man in this way would constitute torture, and be a breach of its international human rights obligations," said Hassiba Hadj Sahraoui, Amnesty International Deputy Director for the Middle East and North Africa.


The report also revealed that at least one hospital has said it would be possible to medically administer the injury at the same place on the spinal cord as the damage the man allegedly caused his victim using a cleaver during the fight.

Amnesty International disclosed that the man has already been sentenced to seven months imprisonment for the offense and alleged that he was convicted and sentenced in a trial in which he had no legal assistance.

Religious Punishments Banned in Bangladesh
Punishments handed down by religious edict, or fatwa, have been outlawed by the Bangladesh High Court.
READ MORE

Drunkards to be Flogged by Date Palm's Stick: Pak Court Rules
Declaring drinking as a bailable offence, the Federal Shariat Court in Pakistan has declared that drunk people would be flogged by date palm sticks if found guilty of creating
READ MORE