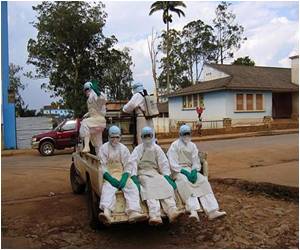 In Saudi Arabia, doctors are testing a patient suspected of having contracted Ebola during a trip to West Africa, hit by an epidemic of the virus, the health ministry said.

The Saudi man was admitted to hospital in the Red Sea city of Jeddah after showing symptoms of haemorrhagic fever upon his return from Sierra Leone.

The patient, in his 40s, is in critical condition and has symptoms "similar to that of Ebola infection."

The UN World Health Organisation said Monday that at least 887 people have died from Ebola since the beginning of the year, after the virus spread across Guinea, Liberia and Sierra Leone.

In April, Saudi Arabia announced a ban on visas for Muslims in the three West African nations wishing to perform the pilgrimage to the Muslim holy sites there.

America Awaits Second Ebola Patient
In West Africa, a second American who contracted Ebola while helping patients was expected in ......

WHO Says Ebola Outbreak Has So Far Claimed 887 Lives
Over 60 people died last week due to the recent outbreak of Ebola epidemic in West Africa, taking .....

Aid Volunteer Suffering from Ebola Virus to Return Back to US for Treatment
A charity aid group has confirmed that an American woman infected with the Ebola virus when working ...

$200 Million Pledged by World Bank for Fighting Ebola
The World Bank declared on Monday that it would provide up to $200 million to Guinea, Liberia and .....