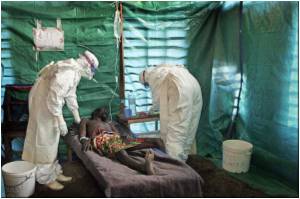 The World Bank declared on Monday that it would provide up to $200 million to Guinea, Liberia and Sierra Leone to help the West African nations contain a deadly Ebola outbreak.

World Bank president Jim Yong Kim, himself an expert on infectious diseases, said he has been monitoring the spread of the virus and was "deeply saddened" at how it was contributing to the breakdown of "already weak health systems in the three countries."

"I am very worried that many more lives are at risk unless we can stop this Ebola epidemic in its tracks," Kim said.


The funding will help provide medical supplies, pay medical staff and take care of other priorities to contain the epidemic and try to prevent future outbreaks, the World Bank said.
Advertisement
The death toll from the Ebola outbreak on Monday reached 887 after 61 more fatalities were recorded, according to the World Health Organization.

The World Bank made the announcement as African leaders including 35 presidents are visiting Washington for a US-Africa summit.

An initial estimate by the World Bank and IMF found that Guinea would lose one percentage point in Gross Domestic Product growth, dropping from 4.5 percent to 3.5 percent expansion in the year, due to the epidemic.

Doctor Who Treated Ebola Victim Has Contracted the Virus
A doctor in Lagos who treated a Liberian victim of Ebola has contracted the virus, the second ......