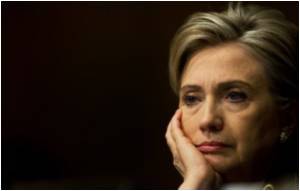 Same-sex marriage has been backed by the former US secretary of state Hillary Clinton. This declaration brings her into line with other potential Democratic candidates for the 2016 presidential nomination.

Clinton said LGBT Americans are full and equal citizens and deserve the rights of citizenship, which includes marriage. Clinton said she supports marriage for lesbian and gay couples "personally and as a matter of policy and law", reports the Guardian.


Clinton described marriage as "a fundamental building block of our society", adding it is "great joy and a great responsibility".


In her bid for the 2008 Democratic presidential nomination against Barack Obama, she, like him, expressed support only for civil unions but not same-sex marriage. Last year, Obama announced he was backing same-sex marriages.

Her video will add to speculation that Clinton plans to stand again for the White House.

Clinton's comments come ahead of a supreme court hearing next week on the constitutionality of the Defense of Marriage Act (Doma) signed into law by Bill Clinton in 1996. The law defines marriage as between a man and and woman, and prevent married gay couples from receiving a range of federal benefits.

Polls show public opinion in the US has shifted to a majority in favour of same-sex marriage. Nine out of the 50 states have passed laws making it legal.

Source: ANI
<< The Psychology Behind Self Harm Revealed
Report Says Only 21 Percent Foreign-Educated Doctors can Pra... >>

Most of the Americans' Support Gay Marriages
According to a new poll, Americans support for same-sex marriage has reached a record high....