Salvadoran President's Home Is Now A Gallery With Focus on Poor 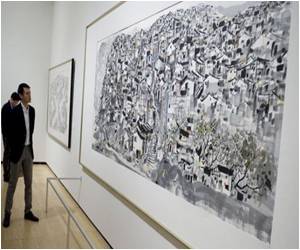 A posh home in an upscale San Salvador district, the Salvadoran president's residence reopened Sunday as a museum with a focus on welcoming the poor.

New leftist President Salvador Sanchez Ceren -- an ex-rebel commander who has decided to keep living in his family home in a middle-class area of the city -- reopened the building as a place where the socially excluded can come to reflect on their country and its artistic wealth.

After winning the court battle against US treasure hunters, the Spanish government displayed thousands of gold and silver coins, found in a 19th-century shipwreck, in a Spanish museum.
Advertisement

The president and First Lady Margarita Villalta de Sanchez were at the opening of the arts center with 45 works by Salvadoran painters and sculptors.


The press was not invited to the opening. It was a special event for about 30 human rights group members and relatives of those killed in the country's civil war.

But a press release said the arts center was meant to welcome the poor and excluded, "a place to gather and reflect on El Salvador's identity and everyday life."

Paintings and gold icons from Russia's art museums will be now placed in an old tobacco factory in Spain
Advertisement
<< Jennifer Lopez Star Power Of Versace At Paris Fashion
Striking Similarity in Size Seen in Babies Born to Healthy ... >>

President Barack Obama inaugurated a haunting Ground Zero museum dedicated to the attacks and hailed the love and sacrifice he called the true spirit of 9/11 , on Thursday.

Amyotrophic Lateral Sclerosis (ALS)
News Archive
News Resource
Advertisement
News Category
Parents are 'Winging It' on Their Kids' Mobile Use Ankle and Ankle Movements While Riding an Hoverboard Is It Healthy to Let Your Mind Wander? Walk Till it Hurts: Good News for Peripheral Artery Disease Patients Plus Size Models and Social Media: Where Do They Fit In?
More News
Sign up for Wellness Consult a Doctor Sign up for Selfcare