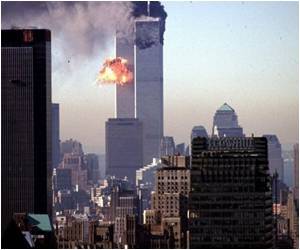 President Barack Obama inaugurated a haunting Ground Zero museum dedicated to the attacks which killed nearly 3,000 people and hailed the love and sacrifice he called "the true spirit of 9/11", on Thursday.

Obama said the museum, in the footprint of the former Twin Towers of the World Trade Center, would ensure the horror and heroism of September 11, 2001 would not be forgotten by future generations.

Researchers have linked high levels of inhaled particulate matter by first responders at Ground Zero to kidney damage for the first time.
Advertisement

The president, speaking slowly and somberly, told New York dignitaries and relatives of those killed in the attacks that it was an honor to recall "the true spirit of 9/11 -- love, compassion, sacrifice -- and to enshrine it forever in the heart of our nation."


Obama said that he was grateful for such a "sacred place of healing and hope" in the bedrock of Manhattan island, and vowed "nothing can ever break us. Nothing can change who we are as Americans."

Aster Degano, a 13-year-old girl from Ethiopia, is now happier than ever before following a surgery in the United States that removed a six pound tumor from her neck on 9/11
Advertisement
Obama was an unknown state lawmaker in Illinois when the attacks shook the foundation of American life and drew the country into a still unfinished cascade of wars and anti-terror operations.

But the aftermath of September 11, the wars in Afghanistan and Iraq which followed, and the thicket of legal snares laid down by the "war on terror" have cast a shadow over his presidency.

The president highlighted the courage of one red bandana-wearing young man called Welles Crowther, who helped people out of the flaming south tower and returned several times, only to perish when the building collapsed.

Before speaking, Obama toured the museum with First Lady Michelle Obama and former president Bill Clinton and former secretary of state Hillary Clinton, who was a senator for New York when the attacks took place.

Former New York mayor Michael Bloomberg, who was in office as the museum became reality, said the museum was a "sacred marker of our past."

The museum, with its 10,000 artifacts, provides an emotionally bracing experience likely to revive terrible memories of the attacks, which shattered the illusion that mainland America was insulated from threats facing much of the rest of the world.

In addition to the two planes steered at the World Trade Center, another aircraft slammed into the Pentagon outside Washington.

A fourth jet was brought down by passengers who overpowered the Al-Qaeda hijackers and brought it down in rural Pennsylvania, far from its believed target of the White House or the US Capitol.

Inside the museum, a map charts the path of the airliners sent on a suicide mission on a crisp but fateful morning nearly 13 years ago.

There are poignant reminders of the people who went to work that day and never came home -- a set of charred credit cards and a woman's shoe, as well as a crushed and burned fire engine memorializing the 343 New York firefighters who died.

A huge iron column, the last recovered from the site in May 2002, is on display, along with stairs from a nearby street that were used by hundreds of people to flee the site of the drama.

In the bowels of the museum, visitors can examine the foundations of one of the towers which once defined New York's skyline but which collapsed in a murderous cloud of fire and ash.

Exhibits take an in-depth look at the events of September 11, including an analysis of the background to the attacks and an examination of how the after-effects are still being felt today.

Visitors, who are barred from taking photographs, can hear the last telephone messages to loved ones left by New Yorkers trapped in the burning towers.

9/11 Attacks 'Impacted' Even Those Who Weren't Connected To It

The 9/11 attacks in the New York impacted the psychological processes of those who were not directly exposed to them, finds a new study.
Advertisement
<< Eight Dead, Hundreds Ill from Contaminated Water in Philipp...
Mourning for One of the Brightest Female Stars by French Wi... >>

Mt. Fuji-Shaped Ice Cream Found to be Delicious by Obama