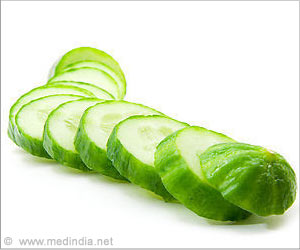 The Centers for Disease Control & prevention (CDC) at the moment are saying 838 people have been sickened as a outcome of a current salmonella outbreak present in cucumbers.

On November 18, CDC found that as much as 838 people have already been infected across 38 states. There are 232 infected in California; 129 in Arizona; 58 in Utah; 43 in Wisconsin; 40 in Minnesota; 32 in New Mexico; 25 in Washington; 24 in Idaho; 22 in Oregon; 19 in Colorado; 17 in Arizona; 16in Montana; 13 in Arkansas and Oklahoma; 9 in Illinois; 8 in North Dakota and Nebraska; 7 in Wyoming and Iowa; 5 in Indiana and Louisiana; 3 in Ohio and South Dakota; 2 in Kansas and Pennsylvania as well as 1 case each in Alabama, Connecticut, Florida, Hawaii, Kentucky, Maryland and New Hampshire.

The findings of a new study reveal that compounds responsible for the bitter taste in cucumbers may be helpful in treating cancer and diabetes.
Advertisement
‘Salmonella infections from contaminated cucumbers are part of a huge outbreak that has sickened 838 people in 38 states.’

Salmonella can cause diarrhea, fever and abdominal cramps 12 to 72 hours after infection. The investigation into the source of these recent illnesses is ongoing. According to the CDC, it takes around 1 to 3 days before a person may experience the symptoms of being infected with salmonella poona.


The affected cucumbers have dark green skin, are 7 to 10 inches long and are sold in bulk, without any wrapper. Fifty percent of the case patients, who range in age from less than 1 year to 99 years old, are children younger than 18.

The salmonella outbreak from imported cucumbers began in September.

A Spanish company is suing the German city of Hamburg for more than two million euros after its cucumbers were wrongly blamed for a deadly E.
Advertisement
<< Steps To Strengthen the Global System for Ebola Prevention
Angelina Jolie: I Love Being in Menopause >>

In yet another bizarre statement, a European Islamic cleric told an Egyptian news website that women should be kept away from food items such as bananas

The Centers for Disease Control and Prevention (CDC) has reported an outbreak of salmonella poona linked to cucumbers grown in Mexico.

Daily Calorie Requirements Sanatogen How to Reduce School Bag Weight - Simple Tips Blood Pressure Calculator Nutam (400mg) (Piracetam) Hearing Loss Calculator Post-Nasal Drip The Essence of Yoga Iron Intake Calculator Drug Interaction Checker
This site uses cookies to deliver our services. By using our site, you acknowledge that you have read and understand our Cookie Policy, Privacy Policy, and our Terms of Use