Risk Factors for HIV in US Navy and Marines During 'Don't Ask, Don't Tell': Study 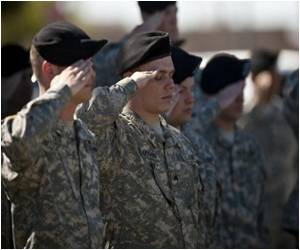 Risks of spreading HIV among the U.S. Navy and Marines personnel is higher, says a study.

Same-sex partners and inconsistent condom use were among the major risk factors for HIV infection among U.S. Navy and Marines personnel during the "Don't Ask, Don't Tell" (DADT) era, reports a study in the October 1 issue of JAIDS: Journal of Acquired Immune Deficiency Syndromes. The journal is published by Lippincott Williams & Wilkins, a part of.


What Factors Affected HIV Risk Under 'Don't Ask, Don't Tell'?The survey study included 250 U.S. Navy and Marines personnel newly diagnosed as HIV positive from 2005 to 2010while DADT was in place. "Don't Ask, Don't Tell" was repealed in 2011, ending the ban on openly homosexual individuals serving in the U.S. Armed Forces.
Advertisement
Participants in the anonymous online survey were asked about their sexual behaviors and other potential risk factors in the three years before acquiring HIV infection. The subjects were identified through the Navy Bloodborne Infection Management Center, which is responsible for HIV screening, prevention, care, and management. Sixty-four HIV-infected Sailors and Marines responded to the survey.

The most frequent risk factor was same-sex contact, reported by 84 percent of respondents. Fifty-five percent said they only had sex with men during the three-year period before they became infected. During this time, about half had concurrent relationships with different partners during this time. Sex with non-service members appeared to be another risk factor for HIV.

"More than three-quarters of respondents were surprised at their HIV test result," Dr Hakre and coauthors write. Many reported low condom use because they knew or trusted their partner and their partner's HIV status. The findings suggest that the infected Sailors and Marines underestimated their individual risk of acquiring HIV

In the Navy and Marines as in the civilian population, men who have sex with men account for most new cases of HIV infection. The new survey finds a higher rate of male-to-male sexual contact than in previous military studiespossibly reflecting "liberalized responses due to DADT repeal effects," the researchers write. In the past, some military personnel with sexually transmitted infections have sought care in the civilian community, for fear of being discharged if their sexual orientation is revealed while receiving care at military health facilities.

The findings help to clarify the risk factors for HIV Armed Forces personnel, and highlight opportunities for prevention effortsparticularly promoting condom use. Now that "Don't Ask, Don't Tell" is no longer in force, prevention efforts for military personnel may be more targeted more openly and effectively, Dr Hakre and coauthors believe. They conclude, "DADT repeal may afford opportunities for facilitating necessary primary HIV prevention strategies such as those targeting condom use and newer social outlets such as Internet networking."

Source: Eurekalert
Advertisement
<< True Costs of Caring For Cancer Patients in Europe Revealed
DRL to Sell Generic Version of Montelukast Sodium in US >>