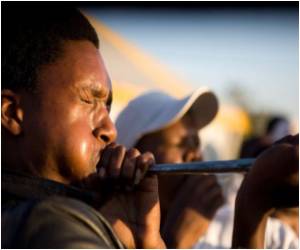 A new hand bone from a human ancestor who roamed the earth in East Africa approximately 1.42 million years ago was found by researchers. They suspect that the bone belonged to the early human species, Homo erectus.

The discovery of this bone is the earliest evidence of a modern human-like hand, indicating that this anatomical feature existed more than half a million years earlier than previously known.

"This bone is the third metacarpal in the hand, which connects to the middle finger. It was discovered at the 'Kaitio' site in West Turkana, Kenya," Carol Ward, professor of pathology and anatomical sciences at MU, said.


The discovery was made by a West Turkana Paleo Project team, led by Ward's colleague and co-author Fredrick Manthi of the National Museums of Kenya. "What makes this bone so distinct is that the presence of a styloid process, or projection of bone, at the end that connects to the wrist. Until now, this styloid process has been found only in us, Neandertals and other archaic humans."
Advertisement
The styloid process helps the hand bone lock into the wrist bones, allowing for greater amounts of pressure to be applied to the wrist and hand from a grasping thumb and fingers.

Ward and her colleagues note that a lack of the styloid process created challenges for apes and earlier humans when they attempted to make and use tools. This lack of a styloid process may have increased the chances of having arthritis earlier, Ward said.

The bone was found near sites where the earliest Acheulian tools have appeared. Acheulian tools are ancient, shaped stone tools that include stone hand axes more than 1.6 million years old.

"With this discovery, we are closing the gap on the evolutionary history of the human hand. This may not be the first appearance of the modern human hand, but we believe that it is close to the origin, given that we do not see this anatomy in any human fossils older than 1.8 million years," Ward said.

The study was published in the Proceedings of the National Academy of Science.

Source: ANI
Advertisement
<< Plants Won't Be Able To Soak Up CO2 If Temperature Rises By...
Get Relief From Arthritis Pain With Help Of 14 Pence Per Da... >>

Will Africa Beat AIDS With Cell Phones?
Mobile phones may be a key weapon in the war against HIV and AIDS in Africa, says to the UNAIDS ......

Risk of Obesity is High in African-American Women Who Eat Burgers from Restaurants
Eating meals from outside of the home is common among Americans, particularly among African ......

The Price of Manhood in S.Africa: Botched Circumcision
The lucky ones survive with mutilated penises and shameful scars for the rest of their lives, but .....