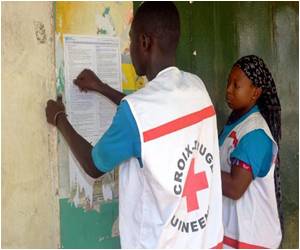 The new global head of the Red Cross said on Wednesday that the world must learn from the fight against AIDS to help beat the deadliest-ever outbreak of Ebola.

While strict measures are needed to defeat Ebola in West Africa, dishing out blame will not help, said Elhadj As Sy, chief of the International Federation of Red Cross and Red Crescent Societies.

"One fundamental lesson to be driven out of the response to HIV, to tuberculosis and malaria, and that could be applied to the Ebola crisis, is the simple fact that communities are part of the solution and they shouldn't be seen as a problem," As Sy, who took the reins on Monday, told AFP.


"Stigma and discrimination often kill as much as viruses, because there's a self-stigma where people will drive themselves underground," he warned.
Advertisement
The Ebola outbreak has claimed more than 900 lives since January. Some 2,500 Red Cross volunteers from Guinea, Liberia and Sierra Leone and 70 international staff have mobilised to care for victims and stem the spread.

The outbreak has a personal edge for As Sy, since he hails from Guinea's neighbour Senegal. He is planning to open a new Ebola centre in Sierra Leone next week, as well as visit Guinea.

"We need an intervention both at the clinical level but also at the community level, to have families and community leaders be part of the response," said As Sy, who previously worked at UNICEF, UNAIDS, and the Global Fund to Fight AIDS, Tuberculosis and Malaria.

"It's very difficult in a West African cultural setting to tell people not to engage with their loved ones who are sick. But in this current situation they will have to do so."

He said there was a particular challenge in the region as a result of religious burial rites that require relatives to wash the body of the dead.

Ebola spreads through human contact, including from dead bodies.

Medical services have frantically tried to discourage these funeral rites, but in some cases outside experts have been met with anger and fear from affected communities, who believe they are responsible for spreading the disease.

The disease has spread from rural parts of Guinea, Liberia and Sierra Leone to cities.

Fears have been heightened by the fact that it has now reached Nigeria, with a spate of infections and two deaths in Lagos, sub-Saharan Africa's largest metropolis.

In a sign of rising concern, the World Health Organization is this week holding an emergency meeting on Ebola. The UN health agency has not so far issued global recommendations such as trade or travel restrictions, but a string of countries in the region and beyond have imposed controls.

"I don't know yet if it is going to be a global threat or not, but the fact of the matter is that we are living in a global world today, and whatever is happening in part of our globe may be of concern to the entirety of our planet," said As Sy.

Ebola has killed around two-thirds of those it has infected since it emerged in 1976 in what is now the Democratic Republic of Congo, with two outbreaks registering fatality rates approaching 90 percent. The West Africa epidemic has a fatality rate of around 55 percent.

Source: AFP
Advertisement
<< Organ Donation Among Hispanic Americans Increases With Aggr...
Vote on Legalizing Marijuana in November at US Capital >>

Ethics Meeting Over Experimental Ebola Drug Called by WHO
An ethics meet to explore the use of experimental treatment in the Ebola outbreak in West Africa ......