Recession Has Made No Impact on Gambling in Crisis-hit Italy 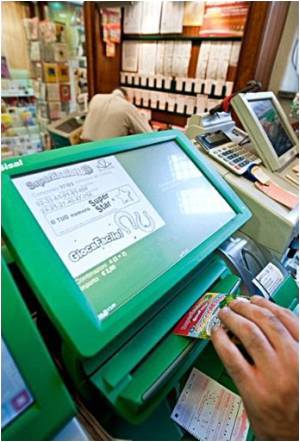 Despite a grinding recession and austerity measures that are hitting the pockets of many ordinary Italians, business is good at Europe's biggest gambling arcade in Rome.

Punters crowd among the arcade's hundreds of slot machines, sip expresso coffees from a gleaming bar or try their luck in the fully-catered bingo hall.

Many Greeks traditionally sit around a gambling table on New Year's Eve, hoping to snare a little luck for the months that lie ahead.
Advertisement

"It's been a record year for us," said Massimo Ruta, director of Italian operations for the Spanish gambling giant Codere which owns the arcade.


Codere operates 3,454 slot machines in 14 arcades across Italy and the turnover for its Italian operations rocketed up 63.2 percent last year to 224.2 million euros ($294.6 million) -- even as the economy tipped into recession.

Gambling Addiction can be Treated With Naltrexone

Naltrexone, an anti-heroine drug can help treating gambling addicts, according to guidelines issued by researchers at the Monash University.
Advertisement
"The crisis has put many of our clients in a difficult situation but gambling is part of human nature," Ruta told AFP in an interview.

"It's difficult to do without it," he said.

Italians gambled 79.9 billion euros last year -- making the country one of the biggest gambling markets in the world after the United States.

With the Italian state's coffers suffering from a mountain of public debt, the industry has provided a welcome windfall.

The state received 9.2 billion euros in taxes from the gambling industry last year -- around half of the net intakes.

That figure could grow in 2012 after a doubling of taxes on slot machines.

"The finance ministry has been dipping in," said Ruta, a 52-year-old former executive at Italian computer giant Olivetti.

"People are attracted to shiny things," he said.

At the same time, however, members of the government have been making noises about greater regulation -- a response to public concern about the rise of gambling addiction and opposition from the Catholic Church.

Health Minister Renato Balduzzi has said gambling is a "social illness" and International Cooperation and Integration Minister Andrea Riccardi has called for a ban on advertising for gambling on Italian television.

"People are gambling more during the crisis," said Matteo Iori, director of the "Pope John XXIII Social Centre" based in the Reggio Emilia region which treats hundreds of gambling addicts every year from around Italy.

"The prospect of a financial reward, the desire to change one's life pushes people to play," Iori said.

Iori's centre started out in 2000 with one weekly meeting for addicts. It now has six meetings a week and Iori tours the country training healthcare specialists and speaking out against gambling in schools.

"The state is encouraging gambling but is failing to protect the most vulnerable people," he said.

Iori's association estimates around 30 million Italians have gambled at least once in their lives and out of that number some 1.7 million are considered at risk while 800,000 are "pathological".

The industry disputes these calculations and says that strict regulations in place ensure that there are no "excesses" in gambling and that it not has nothing to do with the old days of mafia-run dens.

"The state has helped us bring out into the open something that was not regulated or even illegal in certain cases," Ruta said.

"Slot machines help a player have fun rather than dehumanise himself and play in an unsafe way in places of dubious character," he said.

Gambling promoters also emphasise the number of jobs that the rise of the industry has created -- more than 100,000 across Italy.

Codere also has an emergency help line for addicts called "Game Over" and launched a series of workshops last year entitled "Responsible Gambling".

Despite these types of initiatives, gambling still has a negative image.

"If you spend 100 euros for dinner in a restaurant no-one would say a thing. If you come here and enjoy yourself it's considered shameful," Ruta said.

As they skulked out of the "Bingo Re" arcade, customers shook their heads and walked away from press questions.

One woman said: "I sneak off here sometimes. I'm meant to be at work!"

Thousands of Macau's youth pass through the mock casino run by the Macau Polytechnic Institute each year, training to work in the various gambling venues.
Advertisement