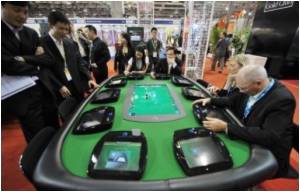 Many Greeks traditionally sit around a gambling table on New Year's Eve, hoping to snare a little luck for the months that lie ahead.

But with Greece looking at a fifth straight year of recession and thousands of households reeling from waves of pay cuts and tax hikes, the spare income left to Greeks can no longer fuel their prodigious love for gambling.


Results coming in from the country's casinos are equally sombre.

While attendance looks steady, bets are down across the board with revenues declining by around 20 percent, Greek weekly Pontiki reported on Thursday.
Advertisement
The country's leading casino Loutraki recorded an 18-percent fall in turnover while runner-up Regency Mont Parnes lost 22.7 percent, Pontiki said.

Five other Greek casinos saw revenues decline by between 3.5 and 25.6 percent.

In another report, Eleftheros Typos daily this week said casino bet totals will likely close at 2.2 billion euros this year, a billion lower than in 2008.

The country's state gaming operator OPAP also saw sales fall by over 17 percent in the first nine months of the year and profits drop by over 21 percent.

"Undoubtedly, the losses are also due to the advent of illegal betting websites," a gaming industry insider told AFP.

"But there is certainly a crisis here, and it's getting deeper... Greeks still want to gamble, but without spare money in their pockets to do so, bets are a fifth of what they were previously," he said.

In 2006, OPAP had named Greeks the world's third most avid gamblers in terms of bets per person, and said they accounted for 30 percent of sports bets placed in all of Europe and 20 percent globally.

In 2002, the government had banned electronic gaming and sent police to raid Internet cafes, arrest operators and seize their hardware.

The decision was ridiculed after the draconian law applying it even extended to online chess and backgammon, and the European Commission later forced Greece to pay a fine over the issue.

Now, with the country over 350 billion euros in debt and no growth forthcoming from an economy choked by austerity measures, state policy has come full turn.

The government recently sold to OPAP licenses for thousands of new video lottery terminals nationwide, and early next year plans to sell most of its 34-percent stake in the gaming operator and to fully privatise ODIE, its troubled horce racing organisation.

The culture ministry, which supervises gaming in the country, earlier in the year said there were believed to be over 250 betting websites, up to 20,000 slot machines and up to 150,000 computers running gaming programmes in the country.

And the head of Greece's recently-established gaming commission EEEP told parliament earlier this month that the illegal turnover from all games of fortune in the country is estimated to be worth seven billion euros a year.

"People wager smaller sums now but it can still add up to hundreds of euros a month," said Damianos, a store salesman. "I have a colleague here who plays Kino (an online number-guessing game operated by OPAP) three times a day, even though his winnings never match the money he spends."

Vegas Casino Closes Its Doors
After 58 years on the Las Vegas Strip, the Sahara shuts down, marking the end of an era....

Sydney Casino Lures Gamblers With $100m Fleet of Jets
Star City Casino has plans of picking up a 100-million-dollar fleet of jets and make a wharf that .....