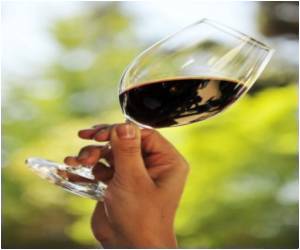 Researchers have discovered that polyphenols present in red wine and green tea retard the growth of cancer, which could be a major breakthrough in treating prostrate cancer.

The finding is important because it may lead to the development of drugs that could stop or slow cancer progression, or improve current treatments.


"Not only does SphK1/S1P signaling pathway play a role in prostate cancer, but it also plays a role in other cancers, such as colon cancer, breast cancer, and gastric cancers," said Dr. Gerald Weissmann, editor-in-chief of The FASEB Journal.

Did u know that simple changes in lifestyle could lower your cancer risks? Find out how!
Advertisement
"Even if future studies show that drinking red wine and green tea isn't as effective in humans as we hope, knowing that the compounds in those drinks disrupts this pathway is an important step toward developing drugs that hit the same target," he added.

Scientists conducted in vitro experiments, which showed that the inhibition of the sphingosine kinase-1/sphingosine 1-phosphate (SphK1/S1P) pathway was essential for green tea and wine polyphenols to kill prostate cancer cells.

Then, mice genetically altered to develop a human prostate cancer tumour were either treated or not treated with green tea and wine polyphenols.

The treated mice showed reduced tumour growth as a result of the inhibited SphK1/S1P pathway.

Human prostate cancer cells were implanted in the mice and results showed a dramatic decrease in tumour size in the mice drinking the EGCg or polyphenon E mixtures.

The new discovery is published online in The FASEB Journal.

Taking Animals Out of Laboratory Research