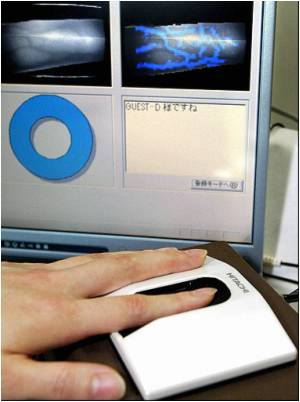 A scientist has said that a scientific instrument featured on CSI and CSI: Miami for instant fingerprint analysis is forging another life in real-world medicine. This instrument could help during brain surgery and ensure that cancer patients get effective doses of chemotherapy.

The report on technology already incorporated into instruments that miniaturize room-size lab instrumentation into devices the size of a shoebox was part of the 244th National Meeting & Exposition of the American Chemical Society, the world's largest scientific society. The meeting, which features about 8,600 reports with an anticipated attendance of 14,000 scientists and others continues here through Thursday.

"With both of the instruments we developed, no sample preparation is needed, which reduces analysis time from as much as several hours per sample to just a few seconds," said Graham Cooks, Ph.D., who led the research team. "Rapid results are critical when a surgeon is operating on a brain tumor or when chemotherapy patients are being treated with powerful drugs that must be administered at precise levels."


The instrument called a "desorption electrospray ionization" mass spectrometer, or DESI, was featured on both CSI and CSI: Miami as a tool to analyze fingerprints. However, this portable instrument can do so much more. It's about the size of a shoebox and does not change or destroy the sample that is analyzed. Cooks' students have even carried it into a grocery store and held it close to the outer surfaces of fruit and vegetables to detect pesticides and microorganisms. The team also used it to identify biomarkers for prostate cancer and to detect melamine, a potentially toxic substance that showed up in infant formulas in China in 2008 and in pet food in the U.S. in 2007. In addition, DESI can detect explosives on luggage.

Chemotherapy drugs perform like 'magic bullets' to destroy cancer cells in the body.
Advertisement
Now, Cooks' team at Purdue University is teaming up with collaborators led by Nathalie Y. R. Agar, Ph.D., at Harvard University to test the instrument in the operating room during brain cancer surgery, comparing it with the gold standard  traditional analysis of tissue samples by pathologists.

"These procedures are among the longest of all surgical operations, and this new technology offers the promise of reducing the time patients are under anesthesia," Cooks explained. "DESI can analyze tissue samples and help determine the type of brain cancer, the stage and the concentration of tumor cells. It also can help surgeons identify the margins of the tumor to assure that they remove as much of the tumor as possible. These are early days, but the analysis looks promising."

The other instrument under development in Cooks' lab is a "PaperSpray ionization" mass spectrometer. The researchers are using this new device to monitor the levels of chemotherapy drugs in patients' blood in real time. "Many cancer drugs have relatively narrow therapeutic ranges, so they need to be in the blood at certain levels to work properly," he noted. "But at present, that information is not obtained in real time, so a patient could end up with too little or too much of the drug in his or her body."

Currently, Cooks' team is testing to see whether DESI can provide different information compared to what pathologists can provide by looking at human tissues under a microscope. In addition, the researchers are testing PaperSpray on patients' blood samples, though Cooks points out that the device also could measure the levels of drugs of abuse or pharmaceuticals in urine or other body fluids.

Drug Toxicity
News Archive
News Resource
News Category
Why Mosquitoes are Attracted to Only Some People? Norovirus, Stomach Viruses can Spread Through Saliva Putting the Brakes on a Bacterium That Cause Digestive Problem Monkeypox May Become a Sexually Transmitted Disease in America This Strain Poses World's Greatest Threat to Human Health
More News
Sign up for Wellness Consult a Doctor Sign up for Selfcare