Physical Activity can Lower Risk of Death from Heart Disease 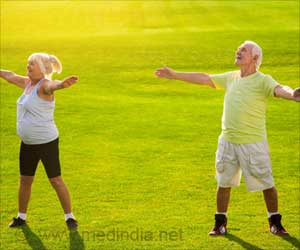 Regular physical activity can lower the increased risk of death associated with frailty in older adults, reveals a new study.

Frailty is a health condition that increases risks of poor health, falls, disability, and death in older adults. Signs of frailty include weakness, weight loss, slow walking speed, exhaustion, and low levels of activity. As our population ages, scientists expect that more and more of us will need to address frailty and its associated health concerns.

Geriatrics is the branch of healthcare dedicated to working with older people. Geriatrics experts have suggested that physical activity may one of the best ways to prevent frailty.


Physical activity includes walking and other gentle forms of exercise. It is proven to improve health. Physical activity can lower the risk of many chronic diseases, including type 2 diabetes, heart disease, several cancers, and depression.

Exercise also can improve your ability to perform your daily activities and can lower your risk of death from heart disease.

In frail older adults, physical activity has been shown to improve strength, balance, agility (the ability to move quickly and easily), walking speed, and muscle mass (the amount of muscle you have in your body). These are all key functions tied to frailty.

Researchers recently designed a study to fill that knowledge gap by exploring whether physical activity could lower the high rate of death associated with frailty in older people. Their study was published in the Journal of the American Geriatrics Society.

The researchers used information from the UAM (Universidad Autonoma de Madrid) study, which included people 60-years-old and older who lived at home in Spain.

The 3,896 study participants were selected according to sex and age. Information was collected at the participants' homes through personal interviews, and physical examinations were performed by trained personnel.

Frailty was determined with the FRAIL scale, which measures five components of frailty: Fatigue, low Resistance (ability to maintain an effort, such as climbing stairs), limitation in the Ability to walk several hundred yards, Illness, and weight Loss.

Researchers reported that, of the participants:


The study's follow-up period was 14 years. During that time, 1,801 participants died (46% of total participants), including 672 due to cardiovascular disease.

Compared with robust participants, pre-frail and frail people had a higher risk of death from cardiovascular disease. Having any one of the five components of the FRAIL scale was linked to a higher risk of mortality from any cause.

The researchers said their findings suggest that physical activity might partly reduce the increased risk of death associated with frailty in older adults.

Lack of Physical Activity Puts 1.4 Billion People at Risk of Diseases: Study
More than 1.4 billion people are at risk of diseases because of not doing enough physical exercise, finds a new study.
READ MORE

More Than 35 Percent of People in India Low on Physical Activity: WHO
Over 35 percent of Indians are physically inactive. Inadequate physical activity may increase the risk of developing heart diseases, cancers, diabetes, and mental health problems.
READ MORE