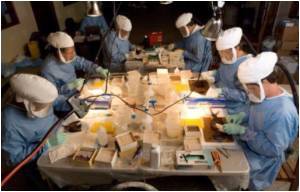 In humans, parasites live in our bodies, co-opt our resources and cause disease. However, it turns out that parasites themselves can have their own co-habitants.

Researchers from Harvard Medical School, Brigham and Women's Hospital and SUNY Upstate Medical University have found that the pathogenicity of the sexually transmitted protozoan parasite Trichomonas vaginalisthe cause of trichomoniasisis fueled by a viral invader. Trichomoniasis infections are more common than all bacterial STDs combined. Annually, trichomoniasis affects nearly 250 million people, typically as vaginitis in women and urethritis in men.

For the very first time, researchers have photographed a virus reproducing and destroying cells, given the tiny size of these micro-organisms between 20 and 200 nanometres.
Advertisement

"Trichomoniasis is associated with devastating consequences for women due to inflammation and related risks of reproductive disease," said Raina Fichorova, leader of the research team as well as associate professor of obstetrics, gynecology and reproductive biology at Brigham and Women's Hospital. "Our future goal is to determine how the viral symbiont and its inflammatory 'halo' affect the risk of preterm delivery and low birth weight."


"This is only one of two incidences that we know of for which the pathogenicity of a protozoan virus has been characterized," said Max Nibert, Harvard Medical School professor of microbiology and immunology and co-author of the paper. "When found together, the result is an increase in virulence of the protozoan parasite to the human host, leading to exacerbated disease."

When diagnosing a child who has a high fever and whose tests show evidence of adenovirus clinicians should take caution and not assume the virus is responsible for Kawasaki-like symptoms.
Advertisement
This study, which was initiated by a Harvard Catalyst Pilot grant, will be published online in Public Library of Science (PLOS) One.

Rather than invading human cells, Trichomonas vaginalis attaches to their surface and feeds on them, sometimes remaining asymptomatic for a period of time. The virus, called Trichomonasvirus, infects the protozoan and increases its pathogenic power by fueling virus-specific inflammatory responses.

Moreover, carrying the protozoan parasite predisposes women to acquire sexually transmitted viruses, particularly HIV and human papillomavirus, or HPV, both of which can lead to serious diseases such as AIDS and cervical cancer, respectively. Fichorova and Nibert have recently obtained funding from the Harvard University Center for AIDS Research to find out if the virus itself is directly responsible for increased HIV risk.

According to Nibert, the virus-parasite symbiosis is the norm rather than the exception with this particular protozoan. Upwards of 80 percent of Trichomonas vaginalis isolates carry the virus. "Unlike flu viruses, for example, this virus can't spread by jumping out of the cell into another one," said Nibert, who has pioneered molecular biology work on double-stranded RNA viruses, a category that includes Trichomonasvirus. "It just spreads between cells when they divide or mate."

According to the researchers, it is this double-stranded nature of the viral genome that contributes to increased virulence of the protozoan parasite. "The double-stranded RNA seems important to the signaling process," added Nibert.

Currently, trichomoniasis is treated with the antibiotic metronidazole. But this treatment is only effective on the protozoan. "When the medication is used, the dying or stressed protozoa release unharmed virions, which then signal to the human cells," explained Fichorova. As a result, the symptoms are aggravated, and this in turn might increase the danger it poses to pregnant women and their children.

"Ahead is more research to better understand the viral cycle and structural features that might be vulnerable to drugs, which will lead to opening new doors for better treatment of trichomoniasis and related diseases," said Fichorova. "Our complementary expertise, interdisciplinary team efforts and strong collaboration is the key to our future success."

Nibert added that basic research on Trichomonas vaginalis is not nearly as supported as he thinks it should be. "It is unfortunate that a human pathogen of such worldwide significance has been neglected to such a degree," he said.

Methamphetamine could have flu-fighting properties, suggests research.
Advertisement
<< Fish Oil may Not Really Prevent Irregular Heartbeat Post He...
Smartphone Owned By Over Half of US Mobile Users >>