Pakistani Schoolgirl Tops List of 101 Most Powerful Asians in UK 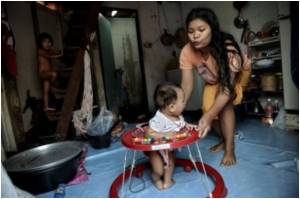 Malala Yousafzai, Pakistani schoolgirl and education activist, has topped the list of 101 most powerful British Asians and Asian residents in the UK.

Malala is the only woman to feature in the top ten and has knocked out Labour MP Keith Vaz off the number one spot that he held last year, the Daily Times reports.

Malala went to Britain from Pakistan after she was shot in the head by the Taliban last year for fighting for girls' rights to education.


The power 101 was unveiled at a ceremony in London and others in the top 20 list were new Today programme presenter Mishal Husain, newsreader George Alagiah and One Direction member Zayn Malik.

A Pup Which Resembles Adolf Hitler Found In UK
Everyone knows Adolf Hitler, but it isn't everyday that you see someone, or in this case a pup ......

UK Researchers Discover Gene Mutation That Causes Excessive Alcohol Drinking
A gene that regulates alcohol consumption and can cause excessive drinking when faulty has been ......