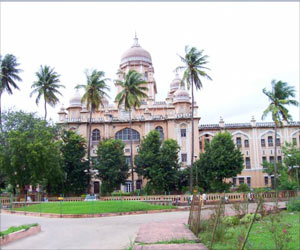 Six farmers, who survived suicide attempts and developed complications during treatment, were given a fresh lease of life by the doctors at Osmania General Hospital with help from an NGO and a private company.

The NGO, Helping Hands Foundation, and the company, Insight Outreach Pvt, provided necessary funds for the expensive surgery of these farmers.


The agriculturists consumed poison and later developed a medical condition called tracheal stenosis, according to doctors who treated them at the Government-run hospital.


The patients, who are put on ventilator support for a long period, develop tracheal stenosis which narrows the airways, resulting in difficulty in breathing and coughing with blood, among other complications, they said.

C G Raghuram, HoD Anaesthesia and Superintendent of Osmania General Hospital, said these farmer-patients, aged between 24 and 30 years, had developed tracheal stenosis and their condition was bad.

The only solution to their medical problems was tracheal reconstruction surgery, an expensive procedure. The doctors, however, decided to perform this surgery using a special stent, which provides instant relief. For the purpose the hospital needed funds as the Government-backed Aryogyasri health insurance scheme does not cover this treatment.

Following a request from the hospital, Helping Hand, led by Mujtaba Hasan Askari, mobilized funds from corporates. Insights Outreach came forward and sponsored the stents costing Rs 80,000 each. In all, the company gave Rs 4 lakh.

The surgery was recently performed successfully on these six farmers, who are now leading a pain-free live, Askari said.

The cultivators attempted suicide for various reasons, including mounting debts due to repeated crop failure, Askari said, adding his NGO will approach the Government seeking necessary help to them.

Families of Girls in 'Suicide Pact' Protest Seeking CBI Probe into the Incident
The protesters were accompanied by villagers and members of local council in Kerala. They demanded the case be handed over to CBI for a fair investigation.
READ MORE

Suicide Risk Higher in Kids Born Before School Cut-Off Day
The arbitrary cut off of school entry will generate a life-time disadvantage by the timing of birth for a number of people compared to others, suggests a study.
READ MORE