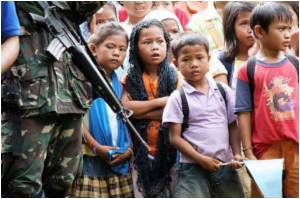 One in eight people in the world still suffers from chronic hunger, said the UN's food agency. UN describes the figure as "unacceptable" and warning that the fight against hunger was slowing down.

"With almost 870 million people chronically undernourished in 2010-2012, the number of hungry people in the world remains unacceptably high," the Food and Agricultural Organisation (FAO) said in its 2012 report on food insecurity.

The latest figures show that 12.5 percent of the world's population, or one person in every eight, has yet to be relieved of chronic hunger, it said.


"We live in a world of plenty which has enough food to feed everyone. For us, the only acceptable number is zero," FAO head Jose Graziano da Silva told a press conference as the report was unveiled.

Sex discrimination hampers progress in alleviating world poverty, says United Nations Secretary-General Ban Ki-moon.
Advertisement
"We live in a world of plenty which has enough food to feed everyone. For us, the only acceptable number is zero," he said.

"The fact that almost 870 million people, more than the population of the US, Europe and Canada, are hungry in a world which produces enough for everyone to eat is the biggest scandal of our time," Oxfam's Luca Chinotti said.

The Rome-based food agency, which compiled the report along with the World Food Programme (WFP) and International Fund for Agricultural Development (IFAD), said the number of hungry was down from one billion 20 years ago.

The FAO had warned in 2009 that the number of global hungry had broken through the one billion barrier, but in Tuesday's report it admitted the data had been off-target and produced fresh figures for the past two decades.

New methods for estimating hunger levels showed that progress against hunger in the past 20 years was "better than previously believed," it said.

"Most of the progress, however, was achieved before 2007-08. Since then, global progress in reducing hunger has slowed," and must rally again to meet the Millennium Development Goal of halving the world's hungry by 2015, it said.

The vast majority of the world's hungry -- 852 million -- live in developing countries, where hunger affects 14.9 percent of the population. Most sufferers live in South and East Asia and sub-Saharan Africa, the report said.

-- 'We are losing the battle in sub-Saharan Africa' --

While hunger rates were down annually over the past 20 years, the FAO warned that "considerable differences among regions and individual countries remain".

But in sub-Saharan Africa, the figure has shot up from 170 million to 234 million, the report said.

"We are losing the battle in the sub-Saharan Africa, where the numbers of hungry are up 64 million since 20 years ago. Conflicts in North Africa have led to an increase in the number of hungry there as well," Graziano da Silva said.

The latest figures are based on new estimates of the proportion of hungry people in the world after the FAO updated its methodology, Sundaram said.

Figures will from now on be collated over three year periods, he said.

"We note with particular concern that the recovery of the world economy from the recent global financial crisis remains fragile," said Graziano da Silva.

However, despite the warnings of a slowdown in beating hunger, the report said the damage done by the crisis was not as bad as had been expected.

"The increase in hunger during 2007-2010, the period characterized by food price and economic crises, was less severe than previously estimated," it said.

The knock-on effect of "economic shocks to many developing countries" from the struggling West in particular "was less pronounced than initially thought."

"Recent GDP estimates suggest that the 'great recession' of 2008-09 resulted in only a mild slowdown in many developing countries, and increases in domestic staple food prices were very small in China, India and Indonesia," it added.

Boosting the lagging fight against hunger will rely on "strong economic growth," which leads to greater dietary diversity as salaries rise, as well as government action, including financing public nutrition and health programmes.

"The flat-lining in the number of people being lifted out of hunger in the last five years should sound alarm bells around the globe," Oxfam said.

Around 20 children who hope to be the doctors, lawyers and scientists of tomorrow rush out of the gates of one of Nepal's top private schools.
Advertisement
<< Study Stirs New Debate Over Cancer Risk From Menopause Drugs
Coffee Quickens Return of Bowel Movement After Colon Surgery >>