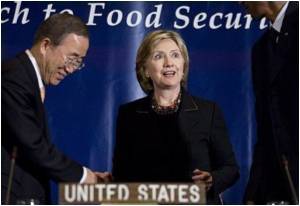 
"The lack of women's representation -- of women's empowerment -- affects individual women's rights -- and it holds back whole countries," Ban said.

There is a general belief that a pregnant woman should eat for two people. How far is this true? This compilation of information, presented in the quiz, will tell you more.
Advertisement
One recent UN study, he said, showed that limits on women's economic participation cost the Asia-Pacific region nearly $90 billion a year in lost productivity.

Helping women was crucial to achieving the Millennium Development Goals on poverty reduction by 2015, the UN chief said.

Women did more work for less pay than men and far more girls were shut out of primary school than boys. Two-thirds of the 780 million people in the world who cannot read were women.

A woman still died every 90 seconds from complications related to pregnancy or childbirth, Ban said, adding he was heading a global movement to end these needless deaths.

"We are moving on all fronts to invest in women so they can reach their full potential, drive development and lead us to a better future," he said.

Researchers have explored the differences between the way the brain of a children and adult brain work to provide insights into how the mind and brain develop and change over time in a new study.
Advertisement
<< Sun Effects Booth App Shows a Futuristic Peek of Sunlight D...
Brain Makes Sure Our Sense of Smell Does Not Deteriorate Du... >>