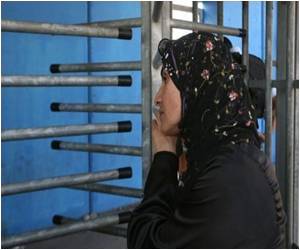 Discrimination against women has sparked a heated debate in Israel.

Beit Shemesh, a town west of Jerusalem which is home to some 80,000 people -- most of them Orthodox Jews -- has become ground zero in the latest uproar over attempts by some ultra-Orthodox men to impose a regime of strict gender segregation.

The town hit the national spotlight last month when Israeli television reported on a series of spitting attacks and abuse against an eight-year-old girl on grounds she was dressed "immodestly."


Reporters also filmed signs instructing women to walk on different sides of the street from men, and interviewed local residents who justified the imposition of strict segregation.
Advertisement
The broadcasts enraged many in secular Israel, coming in the wake of several weeks of reports about segregation on buses, with women forced to sit at the back -- or face abuse from angry male passengers seated in front.

"While the tension between the Haredi (ultra-Orthodox) public and other Israelis is latent, it is undeniable that it has reached new heights," Menahem Friedman, a professor of sociology at Bar-Ilan university, told AFP.

But Daniel Haik, editor-in-chief of the ultra-Orthodox newspaper Hamodia, warns against generalising about the community.

One of the most radical fringe groups is the "Sicari," which takes its name from a band of first-century Jewish zealots, and numbers around 15,000 people -- about two percent of the country's ultra-Orthodox population.

"The majority of the ultra-Orthodox distance themselves from the violence of the Sicari of Beit Shemesh, which has no more than around a dozen members," Haik told AFP.

"Easy generalisations should be avoided so as not to stigmatise an entire community because of the real extremism of a few."

According to Friedman, the outrage provoked by the gender discrimination imposed by radical activists is a symptom of deeper animosity towards the community among the majority of Israelis.

In particular, secular Israelis are deeply concerned by the staggering growth rates of the ultra-Orthodox community, which is largely dependent on state subsidies because its men spend their lives in studying religious texts and usually do not work.

The women in the community have an average of 7.5 children, Friedman says -- more than double the national average of just under three.

And in Jerusalem, half of all the children in the city are educated at primary schools under ultra-Orthodox supervision.

The ultra-Orthodox are also exempt from military service, and with most of them unemployed, they contribute very little to Israel's tax base.

Despite the strong anti-Zionist and anti-state ideology espoused by parts of the community, it is well represented in the parliament, where the electoral system and coalition instability have given the ultra-Orthodox disproportionate influence, with 18 MPs out of the 120-seat Knesset.

"The Haredim depend on state subsidies to survive, which is what provokes the anger of the rest of the Israeli population, all of whom work, serve in the army and pay their taxes," Friedman said.

"Israelis are increasingly worried by the growth of this inactive sector of society, which could eventually lead to the economic collapse of the country."

Gender Discrimination Still Alive at Workplace
Researchers have said that even in today's times, gender discrimination at workplace is very much .....

Virgin Airlines Employee Sues Company After Getting Sacked For Being Pregnant
Two women, who were allegedly sacked by their employer Virgin Blue because they were pregnant, have ...