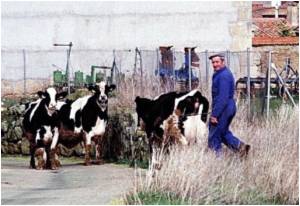 In Britain, around one person in 2,000 carries the protein linked to the human version of mad cow disease, a figure higher than previous estimates, a study said on Tuesday.

But how many people will actually develop the crippling and ultimately fatal disease is unknown, its authors say.

They also warn Britain to fight the risk of wider contamination through blood transfusions and surgical instruments.


The study, published online by the British Medical Journal (BMJ), is the most exhaustive attempt yet to quantify the risk to Britons from variant Creuzfeldt-Jakob disease, or vCJD.
Advertisement
This is a brain-destroying disorder whose suspected cause lies with eating beef contaminated by mad cow disease, a bovine illness that erupted in Britain in the late 1980s and spread to other countries through cattle exports.

But experts have been struggling to calculate the risk for people exposed to the rogue prion protein, called abnormal PrP, during the risk years.

The problem is that little is known about the incubation time for vCJD, although it is likely to be long, and not everyone who carries the prion may develop the disease itself.

Researchers led by Sebastian Brandner, a professor of neuropathology at University College London, analysed 32,441 appendixes that were removed at 41 British hospitals, and tested them for PrP.

Sixteen samples were positive, a figure that, when extrapolated across the United Kingdom's population equates to around one in 2,000.

This compares with a previous sample study that put the figure at an average of one in 4,000.

The new estimate cannot be directly described as being twice as high as the previous one, for the two tallies overlap in their upper and bottom range of estimates.

"Our study detected the presence of abnormal prions in the population," Brandner said in an email exchange with AFP.

"However, it is not possible to predict how many will ever develop the disease. Should anyone develop a disease, it may present differently from vCJD."

So far, an official count by British watchdogs gives a relatively tiny number of vCJD cases, just 177 compared to the millions likely to have been exposed to abnormal PrP.

Brandner said the samples were assessed anonymously, which means it was impossible to know how the patients acquired the prion.

"It is likely, however, that most or all would have acquired (it) through BSE-contaminated food," he said.

The positive samples came from people of all ages and geographical background.

The study says the new figures may be an underestimate, given the limitations of the testing technology and uncertainties about when the prion becomes detectable in lymphoid tissue.

And, it suggests, a broad range of Britons may carry the prion, on the basis of a genetic profile of the appendix samples.

Four of the "positives" came back from people with a so-called VV variation on part of the gene that encodes for prion proteins. Only 15 percent of the British population have this.

By contrast, all of the known cases of vCJD have involved people with the so-called MM variation of the gene, which accounts for 43 percent of the population. Eight of the "positives" were MM.

The other four "positives" were MV, meaning a mixture of the two variants on this part of the gene. People with the MV variant account for nearly 45 percent of the British population.

Still unclear is why so few individuals with the "MM" variant have actually fallen with sick with vCJD.

Also unknown is whether individuals with the "V" component may develop the disease after a very long incubation, or whether in fact they may be shielded from it, says the paper.

The study warns the authorities to maintain their guard.

So far, results indicate "the risks of transmission of vCJD by blood transfusion are low," it says.

However, "it is unclear how many blood recipients have sub-clinical disease and if their life expectancy is shorter than the incubation time.

"It is essential to continue research into tests to detect abnormal PrP in blood."

'Mad Cow Disease' In Cattle Can Extend Extensively In ANS Before Detectable In CNS: Study
Mad Cow Disease or Bovine spongiform encephalopathy (BSE), is a deadly disease in cattle that ......