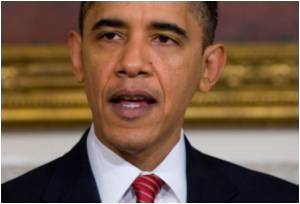 US President Barack Obama's overall approval ratings have shot up from 48 percent in December last year to 53 percent in January in spite of the disappointments over health-employment issues.

Politico quoted a Wall Street Journal/NBC news poll as saying that 40 percent of Americans now see Obama as a moderate, up 10 points from a year ago. However, the percentage of respondents describing him as "very liberal" dropped down from 33 percent in January 2010, to 27 percent in the current poll.

First Lady Michelle Obama enlisted the help of supermarket giant Wal-Mart as she ramped up her fight against the scourge of childhood obesity in the US.
Advertisement

As far as independents are concerned, 44 percent now regard him as "moderate", a huge jump from a year ago when only 28 percent independents regarded him that way in the midst of the health care fight.


William Galston, a former adviser to Bill Clinton and Brookings scholar who studies polarization on politics, said that although the Americans were not happy with the policies of the Obama administration even when the country was going through the worst phase in 2010, they continued to like the President.

US President Barack Obama has signed into law a bill to compensate emergency workers who fell ill following rescue and clean-up efforts during the 9/11 attacks on New York City.
Advertisement
"A lot of people were disappointed in President Obama but they never really gave up on him. They still hoped he could turn out to be the president they voted for in 2008. He clearly seized an opportunity in late 2010 ... but none of this will really matter if he can't deal with the unemployment rate," he added.

Yesterday, a Public Policy Polling has revealed that Obama is ahead of over four potential 2012 presidential Republican contenders.

Although former Massachusetts Governor Mitt Romney remains one of the most competitive Republicans against Obama, the President also secured huge advantages against former Arkansas Governor Mike Huckabee, former House Speaker Newt Gingrich and former Alaska Governor Sarah Palin, than he had in November. In the latest poll, he is leading over Huckabee by five points, Gingrich by 12 points and Palin by 17 points, the poll said.

The Arizona condolence speech helped Obama to win back the hearts of disappointed people in the country, including his 2008 presidential contender John McCain.

Mark McKinnon, a former adviser to John McCain and George W. Bush who has long admired Obama's messaging and political skills, said "Despite all the difficult issues President Obama has been facing, most people like him and want him to succeed. But I think they were also genuinely starting to wonder if he was up to the job. But he showed real presidential leadership and skills in Arizona."

A shocking 40 percent of under 25-year-olds in Spain are unemployed, with no success in their hunt for a job.
Advertisement
News A-Z
A B C D E F G H I J K L M N O P Q R S T U V W X Y Z
What's New on Medindia

Find a Hospital Loram (2 mg) (Lorazepam) Diaphragmatic Hernia Find a Doctor Post-Nasal Drip Turmeric Powder - Health Benefits, Uses & Side Effects Selfie Addiction Calculator Drug - Food Interactions Accident and Trauma Care Vent Forte (Theophylline)
This site uses cookies to deliver our services. By using our site, you acknowledge that you have read and understand our Cookie Policy, Privacy Policy, and our Terms of Use