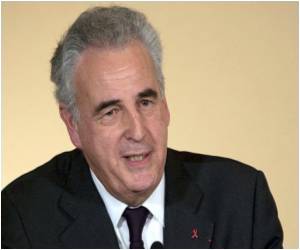 Sweden has told Michel Kazatchkine, head of the global fund to fight world's biggest killer diseases that it will not pay its 167 million euro contribution unless something is done to ensure that the cash is not siphoned off, says a report.

Michel Kazatchkine, the executive director of the Global Fund to fight AIDS, Tuberculosis and Malaria, said that Sweden's refusal to meet its commitments would have a major impact on his organisation's plans.

But after talks with Kazatchkine in Stockholm on Friday, Development Minister Gunilla Carlsson said that Sweden felt more had to be done to prevent its cash falling victim to corruption among recipient countries.


"We are paying greater heed to the danger of corruption so before we commit ourselves to aid, we want to see practical measures put in place to combat this problem," the minister was quoted as saying by the Svenska Dagbladet daily.

Statistics tell us that the world HIV+ population has risen drastically from 8 million in 1990 to a whopping 33 million in 2007! Even more alarming is the fact that young people (below the age of 25) account for half of these infections! This is adequate proof for the lack of awareness among the general public even in these modern times. So take our quiz and brush up on the essential facts of HIV/
Advertisement
According to the paper, Sweden has refused to stump up its 1.5 billion krona (167 million euro, $226m) contribution for the period covering 2011-2013 since a report by the United Nations last year showed how donors' cash had been diverted by corrupt officials in at least four countries.

Sweden is the biggest per capita contributor to the fund which was created by the G8 group of industrialised nations in 2002.

The Swedish contribution "is a significant amount of money for us," Kazatchkine was quoted as saying by newspaper.

"The fact that Sweden is stalling on its commitment is not a good sign. We need to know quickly whether we can pour our energies into our aid projects," he added.

"We also believe that we have demonstrated a much greater degree of transparency and that we are doing everything that we can to fight corruption."

The fund, which has an overall budget of 21.7 billion dollars drawn from 150 countries, is the largest single source of funding for three of the world's biggest killer diseases.

The Swedes have a traditional, informal celebration of light to adjust to the day and night darkness that envelops them in the closing months of the year.
Advertisement
News A-Z
A B C D E F G H I J K L M N O P Q R S T U V W X Y Z
What's New on Medindia