'Not So Simple': Concussion Spectrum in College Athletes Wearing Helmets 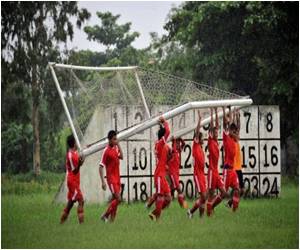 Do you know what it means to have a head concussion? In recent years much has been written about the short- and long-term consequences of concussions sustained in sports, combat, and accidents. There appear to however be no steadfast rules guiding the definition of concussion: the characteristics associated with this type of traumatic head injury have shifted over time and across medical disciplines.

Within the context of a larger longitudinal investigation of the biomechanical factors in play that correlate with concussions in collegiate helmeted contact sports, researchers in New England and Virginia used data they obtained to investigate which signs, symptoms, and clinical histories were used by athletic trainers to define concussion in individual players. The investigators found that a heterogeneous collection of acute clinical characteristics currently exists for those events diagnosed as concussion in college athletes engaged in contact sports. A discussion of this "concussion spectrum" is given in "Spectrum of acute clinical characteristics of diagnosed concussions in college athletes wearing instrumented helmets. Clinical article," by Ann-Christine Duhaime, M.D., et al., published today online, ahead of print, in the Journal of Neurosurgery.

To Prevent Concussions, It is Necessary to Ban Bodychecking in Youth Hockey

Together with her colleagues, Dr. Duhaime, Director of Pediatric Neurosurgery and of Neurotrauma and Intensive Care in the Neurosurgical Service of Massachusetts General Hospital, examined concussions diagnosed in athletes participating in helmeted contact sports (football and ice hockey) at three universities: Dartmouth, Brown, and Virginia Tech. Both male and female athletes participated in the study. The students' helmets were outfitted with Head Impact Telemetry (HIT) System technology to record and measure peak linear and angular acceleration of impacts. The helmets were worn during practice sessions and games throughout two to four seasons. The investigators did not attempt to influence how trainers and team medical personnel defined concussion operationally, but instead relied on the clinical characteristics deemed indicative of concussion by the universities' athletic departments.


More than 486,000 head impacts were recorded in 450 athletes, and concussion was diagnosed in 44 of these athletes (48 concussions) by team medical staff. Unlike concussions more often diagnosed in emergency departments, where a single, identified contact event leads to a loss of consciousness or other clear alteration in consciousness, most diagnoses in this sports setting were based on self-reports by athletes, and only a few were based on changes in athletes' clinical conditions that were observed by others. Thirty-one concussions could be directly associated with a specific impact, whereas a relationship with a specific impact could not be verified in the other cases of concussion. Only half of the athletes noted symptoms immediately after a contact event; in many athletes, the onset of symptoms was delayed. The most common reported symptoms were mental clouding, headache, and dizziness; only one case involved a loss of consciousness. The diagnosis of concussion by trainers often occurred in an even more delayed fashion: the diagnosis was made immediately after the event in 6 cases and at a later time in the other cases (median 17 hours postinjury).

Presently concussions diagnosis is based primarily on the patient's accident history and on clinical examinations that check for symptoms like headache, dizziness and behavioral abnormalities.
Advertisement
In general, the mean peak linear and angular accelerations for specific impact events that could be directly linked to concussions tended be in the high percentiles for the sports examined; however, there was considerable variability in the ranges of these measurements (mean peak linear acceleration 86.1 ± 42.6 g [range 16.5.9 g], mean peak angular acceleration 3620 ± 2,166 rads/sec2 [range 183,589 rads/sec2]).

The variety of signs and symptoms, the imprecise timing of symptom appearance and relationship to a specific contact event, the lack of externally observed findings, and the broad ranges of the linear and angular accelerations of the impacts that coalesce in a diagnosis of concussion in college sports make it difficult to identify predictors of acute, intermediate, and long-term risks of adverse consequences resulting from sports-related head impacts. By describing the heterogeneity inherent in diagnoses of concussion as a "concussion spectrum," the authors point out the need for renewed efforts to determine which factorsclinical, mechanical, genetic, or othersinfluence outcomes in patients with single as well as repeated head impacts. The authors point out that while a clinical diagnosis is important to protect players from additional and potentially more serious consequences, it is also possible that athletes who do not receive the diagnosis of "concussion" may be at similar risk. Likewise, it is possible that some players who receive a diagnosis of concussion do not fall into a high-risk category for specific consequences. The authors note that there is still much to be learned, and that the terminology in use can sometimes oversimplify a more complex set of processes that still need to be teased apart. In their response to an accompanying editorial, they state, "By carefully characterizing exactly what we are talking about and by continued investigation, which will take more time ... , neurosurgeons and others will be best positioned to offer effective treatments and to advocate knowledgeably for appropriate injury-prevention strategies."

A sideline visual test effectively detected concussions in collegiate athletes, according to a team of researchers from the Perelman School of Medicine at the University
Advertisement
<< Timebomb of Public Health Challenges Need To Be Tackled By ...
Social Factors Influence Our Perceptual Processing >>

Wrist Sprain
News Archive
News Resource
Advertisement
News Category
Death Caused by a Rare Type Amoeba: Research Study Japan Approves Smallpox Vaccine for Monkeypox Did Human Evolution Shrink Your Brain? What to Do When Your Asthma Medication Doesn't Work? Which is Better to Improve Smoker's Health  Cigarettes or E-Cigarettes?
More News
Sign up for Wellness Consult a Doctor Sign up for Selfcare